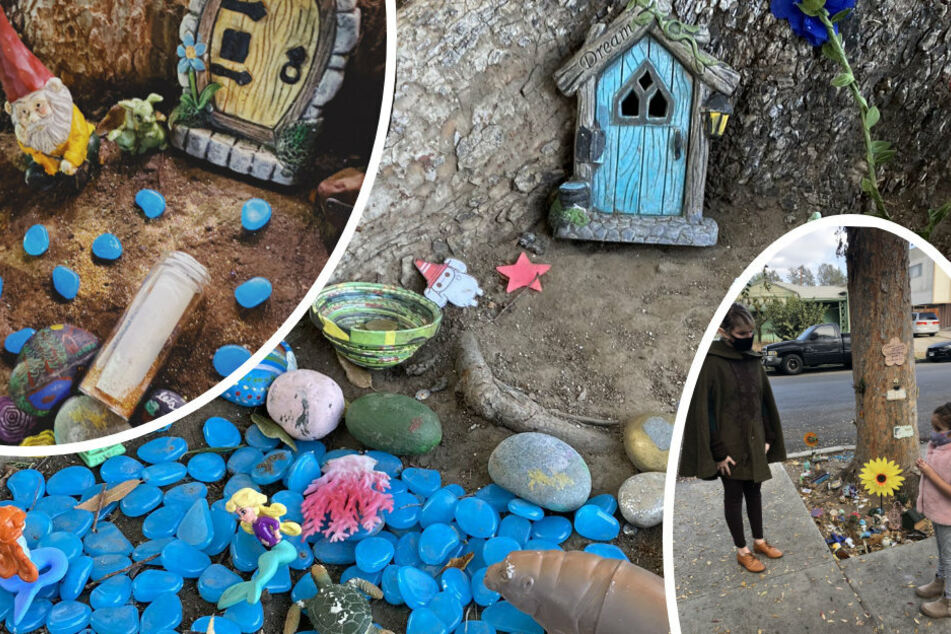 Little girl creates a fairy garden and then something magical happens
Dec 21, 2020 12:11 PM

Little girl creates a fairy garden and then something magical happens

Little Eliana from Los Angeles created a fairy garden, and then something wonderful happened.

Los Angeles, California - Little Eliana had been feeling lonely during the early months of the pandemic and began building a fairy garden in her yard. When a neighbor discovered it, she came up with a lovely idea .

LA local Kelly Victoria experienced a fairy tale that changed her life and she decided to share it with the world.

In a thread published on her Twitter account, Kelly wrote that she often couldn't sleep at night due to "personal stuff." Each evening, she would go on walks around her neighborhood.

That's how, one fateful night, she came across a magical garden.

Kelly said she "noticed that someone had set up a few little objects in a tree planter and upon closer inspection I realized it was a fairy garden with a little note about the 4 year old girl who felt lonely in quarantine and wanted to spread some cheer."

Without further ado, Kelly slipped into the role of Sapphire the fairy and posted a letter to 4-year-old Eliana on the special tree.

Eliana learned from the letter that a fairy named Sapphire had moved into the tree. The fairy also had some tasks for the girl: Eliana was challenged to say five nice things to someone she loved, do three helpful things for someone in need, promise to always be kind and brave, and draw a picture of her favorite animal.

If she completed those tasks, Eliana would receive a set of magical lucky dice that a wizard had given the fairy.

The next day, Kelly found a response from the girl with proof that she had completed the tasks. Kelly kept her promise and left the magical dice.

It was the beginning of a sweet friendship.

For more than nine months, the girl – with the help of her mom – and Sapphire exchanged letters and gifts, helping each other to feel less lonely.

The fairy tale garden grew in detail, and Kelly learned the child's name – Eliana – and got in touch with her mother by phone.

In early December, Eliana and her mom told Kelly they would be moving houses, and the fairy garden would be left behind.

Eliana got to meet fairy Sapphire

Kelly decided to introduce herself to Eliana – of course in agreement with the child's parents – and explained that "fairies grow to the size of a human just for one day to move all of their belongings."

Dressed up as a fairy – face mask included – Kelly met Eliana by the fairy tree. They talked for a long time and promised each other to keep in touch.

Kelly's Twitter story created an instant buzz with more than 300,000 people giving the pictures a like and expressing their appreciation for the two.

Fairytale story is now bringing light and hope to thousands

"We need more people like you in the world," one woman wrote. Another expressed what probably most are feeling: "Thank you for sharing this amazing story. Such a wonderful act of kindness during this singularly hard year. This brightens everyone who reads of it!"

The friendship has been deeply meaningful to Kelly. She hopes that "one day when she’s older [Eliana] can understand that I truly needed her as much as she needed me these past few months."