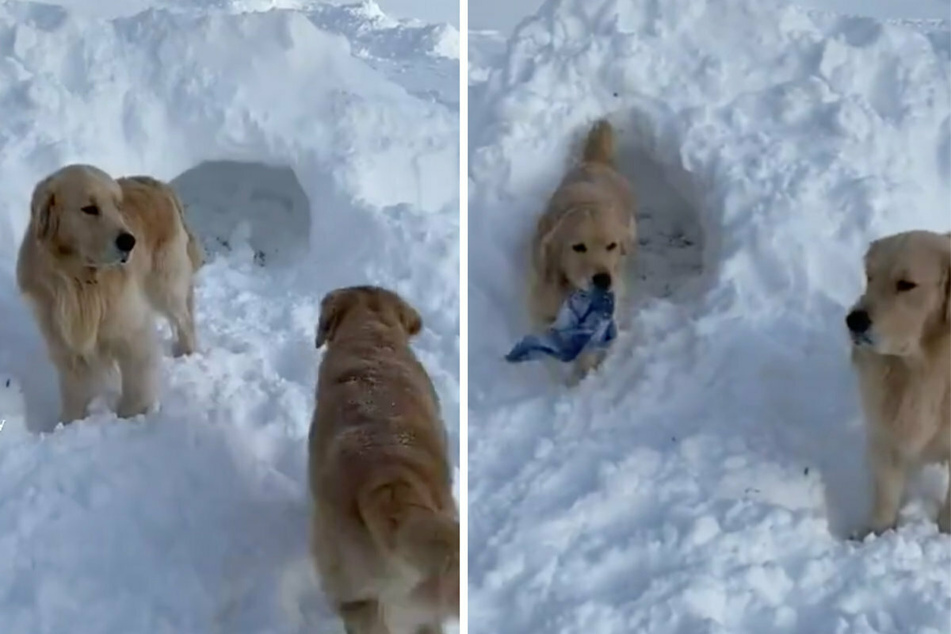 Dog owners can't believe what their golden retriever finds in the snow!

When a sneaky golden retriever disappeared into a self-made snow shelter, his owners were speechless at the odd capture he made in the cave.

Florida - A sneaky golden retriever left his owners speechless after he disappeared into an igloo and came out with a special gift!

The Floridian owners came up with a snowy surprise for their two beloved dogs: a snow cave to play in.

The two golden retrievers, Marty and Murphy, could hardly believe their luck, frolicking around in the snow all day long.

The owners were happy their surprise went down so well and decided to film all the frolicking.

But what they ended up recording instead left them stunned. The video shows Murphy rushing into the cave through one opening of the tunnel.

When he comes back out, he's carrying something in his mouth.

Is that..? Yes, it's the blue scarf his owners thought they had lost!

The sly dog must have somehow gotten his paws on it and hidden it in the snow cave – which definitely wasn't meant to be his secret stash! The dog-lovers could only admire Murphy's craftiness and they shared the hilarious clip on their social media channels.

On TikTok, the short clip amassed over 26,000 clicks, while over 90,000 users viewed the furry footage on Instagram.

TikTok and Instagram users were instantly dazzled by the happiness the two dogs radiate in the clip. "Happy doggies in the snow," they wrote, and "So cute!"

The owners have since provided their dog-fans with even more cute videos of their happy pooches rollicking around in a winter wonderland.