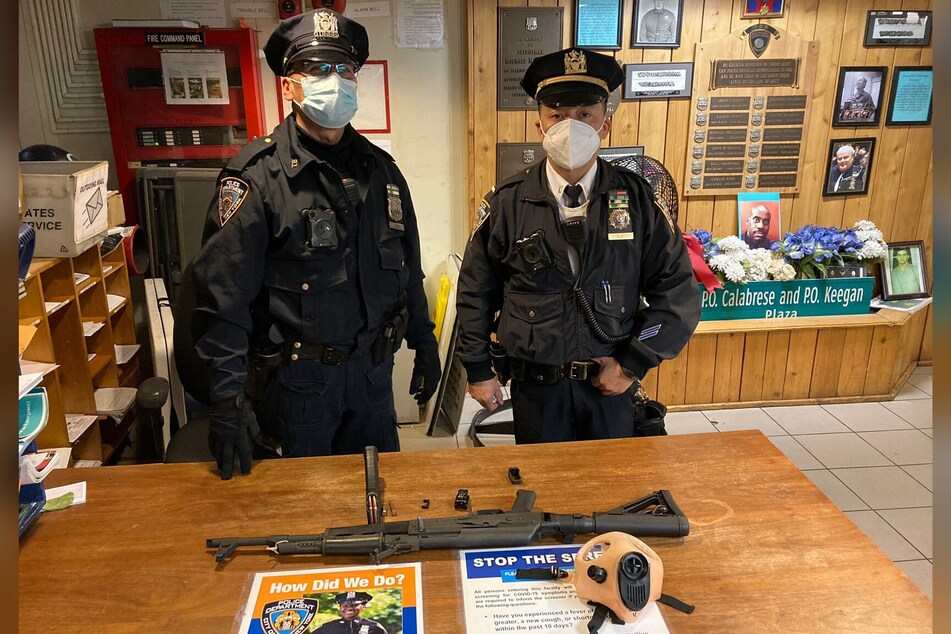 The mother of an 18-year-old Ohio man caught with an AK-47 in a midtown Manhattan subway said her son wasn’t planning any violence.

New York, New York - The mother of an 18-year-old Ohio man caught with an AK-47 in a midtown Manhattan subway said her son wasn’t planning any violence – he just thought it would be okay to visit New York with an assault rifle in tow.

"I BEG of the media to quit painting a bad picture of my son whom was misinformed of the gun laws in NY," the mother of suspect Saadiq Teague messaged a Daily News reporter on Saturday.

"He was visiting Times Square for the first time to see it in person. He was so excited and happy and had no other reasons for being in NY!" she said.

Teague – whose father was killed in a police shootout in Columbus, Ohio, last month – was arrested Friday around 12:30 PM inside the 42nd St./Port Authority station, sitting near a cell phone charging station with the AK-47 in plain view.

The rifle did not have a magazine inserted. A magazine and ammunition were within Teague’s reach, said law enforcement sources.

Teague was questioned by detectives from the NYPD Intelligence Bureau before he was charged with multiple counts of gun possession and unlawful use of drug paraphernalia. He told cops he owned the weapon legally in another state, according to a source.

Teague posted bizarre rants on Instagram prior to his arrest

Minutes before his arrest, the young suspect posted an Instagram video ragging on the Big Apple – revealing a black, metal object sticking out of his backpack.

“F*** New York!” the young man screamed into the camera as he walked down the street. A timestamp read 12:18 PM.

"I want to go home!" he yelled, smiling from ear to ear. "Back to Columbus!"

It’s not clear if the object in his backpack seen in the Instagram video was the same assault rifle.

"I love you all!" Teague screamed at reporters as cops marched him out of the NYPD’s Transit District 1 headquarters at Columbus Circle on Friday night in handcuffs. His arraignment was pending Saturday.

Teague’s mother defended her son as "a graduate from a Grade A high school" and insisted he didn’t have a criminal record.

She added that her son was in “NO WAY SHAPE OR FORM affiliated with the incident in which he lost his father.

"He works to help his family and neighbors," the mom wrote. "He has a village behind him who will be here for him praying and helping him to understand and help him heal from this."

Teague's father was killed in a shootout with police

According to media reports, police tried to execute an arrest warrant for a February shooting when the elder Teague drove away.

Officers broke off their car pursuit, but a police helicopter kept tracking him. Teague pulled over on an interstate highway, and police in patrol cars found him and resumed the pursuit, according to reports.

Teague drove the wrong way on the highway, striking two vehicles, before he got out of his car and confronted the officers with a weapon. He was killed in the ensuing shootout.

Andrew Teague left behind eight children, including Saadiq, and six grandchildren, according to his online obituary. He often spoke about opening a family-owned business, mentoring and getting involved with reentry programs, the obituary said.

"He apparently had this hidden gift of making people feel that they alone filled his heart, not realizing that there were many special areas in his heart just for each one of us," the obituary read. "Drew dedicated his life to protecting those he loved no matter what!"