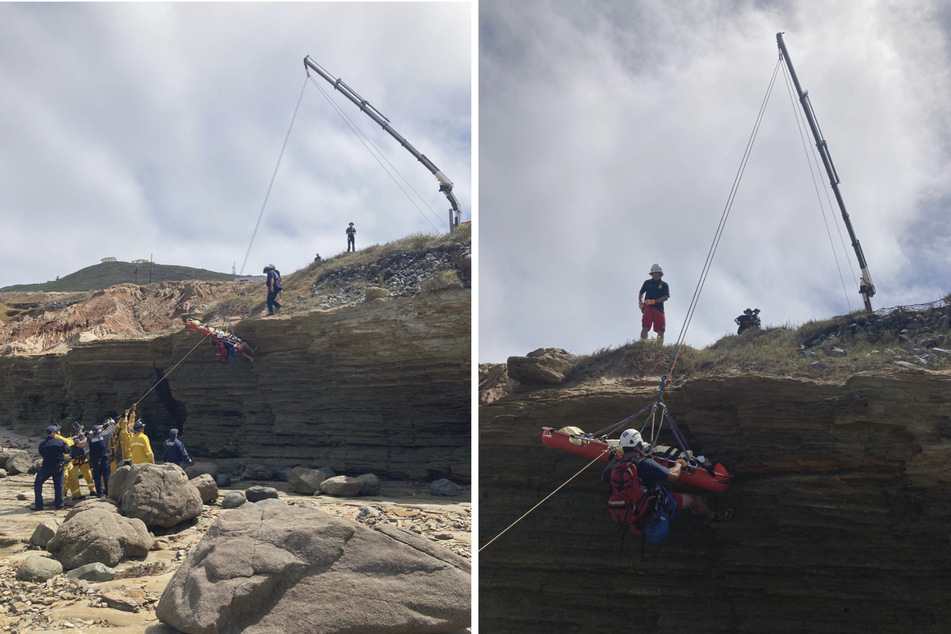 At least three dead and dozens injured as suspected smuggling boat capsizes off San Diego
May 3, 2021 10:46 AM

An overloaded boat crashed off the coast of San Diego, leaving at least three people dead and 27 hospitalized in a suspected human smuggling attempt.

San Diego, California – An overloaded boat crashed into a reef and broke apart off the coast of San Diego on Sunday morning, leaving at least three people dead and more than two dozen hospitalized in what officials said was a suspected human smuggling attempt.

The boat, described as a 40-foot cabin cruiser, was spotted off the coast of the Point Loma area a short time before 10:00 AM near the Cabrillo National Monument, officials said.

Lifeguards and other first responders helped victims who jumped into the water from the boat, five of whom were in "CPR status," meaning they were having trouble breathing, said Jose Ysea, a spokesperson with the San Diego Fire-Rescue Department.

Three people died and 27 others who suffered what Ysea described as "varying degrees of injuries" in the accident were taken to local hospitals.

Video from OnScene TV showed medics performing CPR on two men on a dock while a Coast Guard helicopter crew lowered a man in a sort of basket in a field. Medics took some people away on gurneys, while others walked away alongside medics.

The boat broke apart when it hit a reef near Cabrillo. Lifeguards initially thought only one person was on the vessel but when it hit the reef, dozens of people emerged from the damaged boat and jumped into the water as the boat broke apart, San Diego lifeguard Lieutenant Rick Romero said at a press briefing.

Rescuers responded to the scene

"There were people in the water drowning, getting sucked out the rip current there, and there was people on shore," he said. "We picked up about seven people in the water, two of them were faced down and drowned... The numbers kept on increasing."

Lifeguards also made a cliff rescue, he said.

Human and drug smugglers increasingly turned to the Pacific Ocean as the Trump administration tightened border infrastructure on land in recent years.

Ysea said by time he got to the scene, near the national monument, a large "debris field" could be seen in the water.

"It is very rocky over there, and the waves – while they weren’t too high – they looked pretty strong," he said, enough to slam a boat into the rocks.

San Diego fire officials said they assigned 93 people to work the incident, including medics, engine crews, and a chaplain.