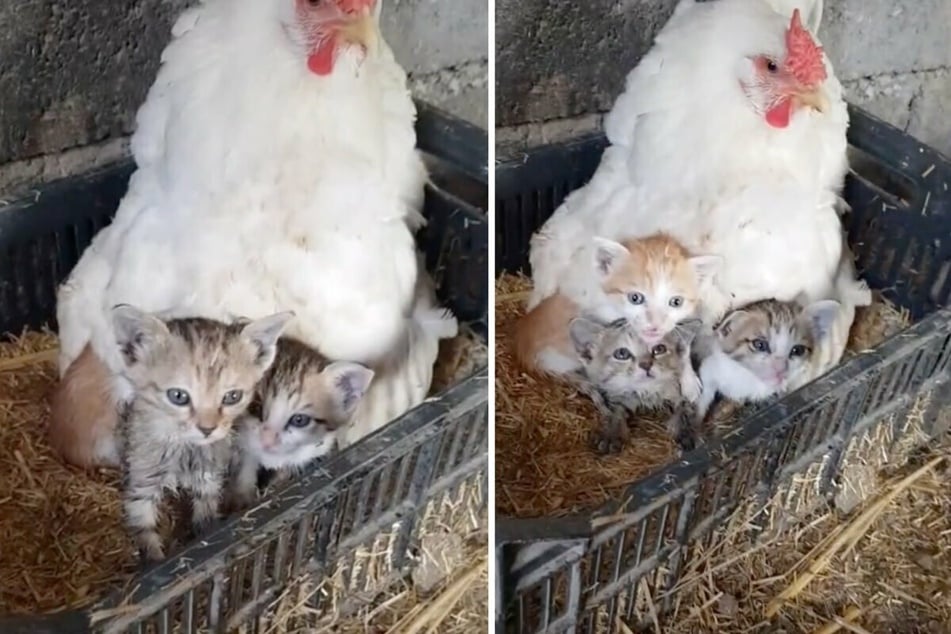 All cooped up: mother hen has three very special orphans to hatch

When Goran A. Surchi heard some strange noises coming from his chicken coop, his first thought was that his animals might be in danger.

Internet - When Kurdish farmer Goran A. Surchi heard some strange noises coming from his chicken coop, his first thought was that his animals might be in danger.

But very quickly it became apparent that his fears were not necessary. As he drew closer to the hens, he realized there was not a ruffled feather in sight. They appeared to be completely untouched.

He then recognized the sounds as meowing.

Had a feline thief somehow slipped in for a quick snack?

Unlikely, as the sounds seemed to be coming from under one of the hens. Gently, Surchi lifted the feathered gal and set eyes upon an absolute wonder. Underneath the big, motherly hen sat three little baby kittens, peering up at him with wide eyes from under their new warm mama.

It seems the babies had been orphaned, and naturally found themselves a new mother to care for them and keep them warm.

As Surchi told BoredPanda, he had previously found the lifeless body of a cat in a nearby lake, presumably the mother of the kittens, and the hen must have sensed somehow that they were in need.

Impressed, he shared the incredible footage on his TikTok account, which has already been viewed more than 300,000 times within a few days.

Viewers were beside themselves with excitement and couldn't get enough of the cute foster mom!

"I've rarely seen anything so cute," gushed one user, and another agreed: "My heart is about to burst!"

"Animals are really special," a third chimed in, summing up the video perfectly.