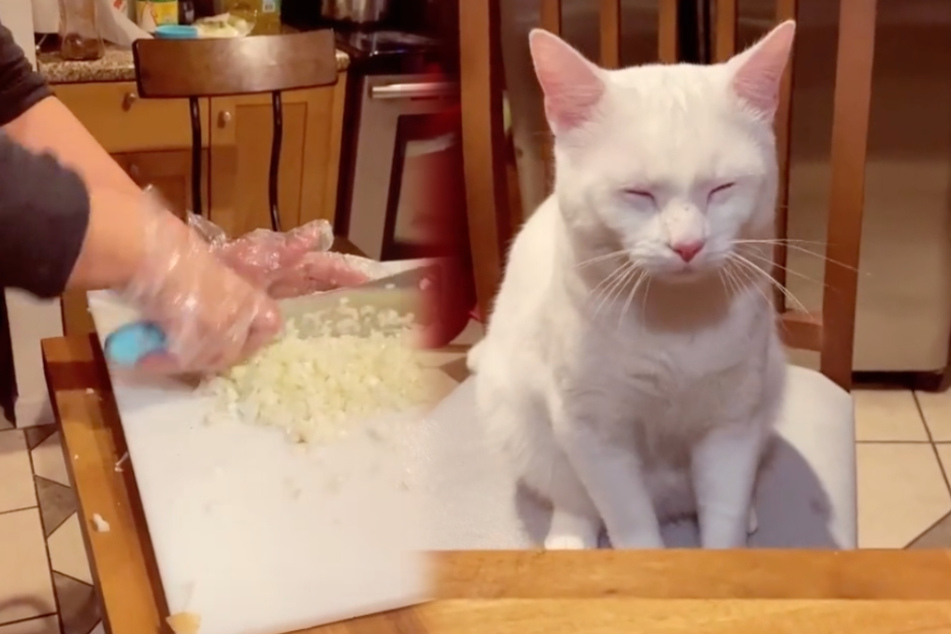 This poor cat's suffering was caught on camera, and her misery has gone viral.

Indianapolis, Indiana - Everyone knows cutting onions will make you cry, but as this TikTok clip proves, the chemical released doesn't just irritate the human eye.

TikTok user anarosa1123 posted a clip of herself cutting onions, but the woman wasn't the only one in the kitchen. Her white cat, named Coco, was watching from a nearby chair.

Coco really didn't appreciate the onion chopping. The feline looked miserable and couldn't keep its eyes open. It just kept squinting and blinking, but instead of fleeing, the cat stayed at the table and began to meow.

"Cocos eyes are burning," wrote the 29-year-old TikTok user in the video's description, adding in Spanish "pero ahí anda de metiche," which roughly translates to "but there he goes a meddling." The video's soundtrack is very fitting. It’s El Muchacho de los Ojos Tristes (The boy with the sad eyes) by Jeannet. This little cat definitely has some sad, or at least smarting, eyes.

When you cut an onion, its severed enzymes reform and create a chemical called syn-propanethial-S-oxide. This volatile chemical vaporizes quickly and is what makes your eyes, or your pet's eyes, sting. To deal with this meddlesome irritant your body produces tears to wash the pain away.

Animals like cats also suffer from the chemicals released when cutting an onion. Onions are actually toxic to cats if ingested. Thankfully Coco didn't eat anything the owner was preparing!

The clip with the sad but funny cat already has five million views and some 12,000 comments. Several TikTok users thought the kitty was being stubborn: "Why are cats like this...Like it can go ANYWHERE else in the house but chooses to STAY there," wrote one.

Other's felt sorry for Coco and urged the owner to move her pet somewhere else. "Poor cat can't leave because she can't see!" one person exclaimed.