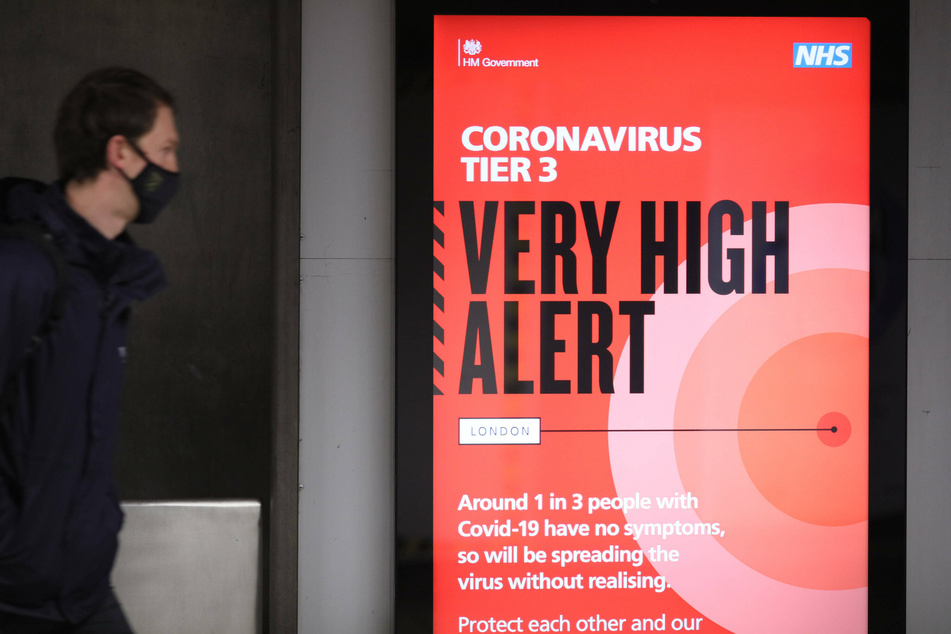 Alarmed officials reacted to a new, highly contagious variant of the coronavirus that has sent London and south-eastern England into lockdown.

London, UK - The list of European Union countries stopping flights from Britain continued to grow on Sunday as alarmed officials reacted to a new, highly contagious variant of the coronavirus that has sent London and south-eastern England into lockdown.

The Netherlands was the first on Sunday to announce an immediate ban on flights, with similar advisories coming throughout the day from Belgium, Austria, France, Italy, Latvia, Lithuania, Estonia, Bulgaria, Switzerland, the Czech Republic, and Sweden.

Ireland will institute a 48-hour flight ban to Britain while ferries will be limited to freight travel.

Outside of Europe, Canada's government also announced it would ban flights from Britain for 72 hours starting Monday.

Germany has banned nearly all flights from Britain starting from midnight, with a few exceptions, including cargo planes.

British Prime Minister Boris Johnson has called a meeting of civil contingencies committee on Monday in response to the flight bans, Downing Street said, according to the British Press Association.

The recently discovered variant is up to 70% more contagious than the previously known form, but there was no evidence it was more deadly.

Individual cases of the variant have apparently already been found in other EU countries.

Health authorities in both the Netherlands and Italy reported that a virus with the variant described in Britain has been identified in their countries in the past few weeks.

The Dutch public health institute RIVM said the variant was identified in a random sample in the Netherlands in early December, and that further investigation was planned.

Italy's health ministry said that a patient and their partner who returned from Britain by plane a few days ago were found to have the variant. They arrived in Rome's international airport and are both in isolation, the ministry said.

Virologist Christian Drosten, who has become a household name in Germany for his role as a government Covid-19 adviser, said the strain had yet to be seen in Germany.

The European Centre for Disease Prevention and Control (ECDC) has advised health authorities and laboratories in Europe to analyze and sequence virus samples to detect its potential spread.

It also urged the testing, isolation and follow-up of anyone linked to cases. Any cases should be reported through the EU's early warning and response system, the agency said.

Experts widely agreed that vaccines would be effective against the variant.

"I don't see any reason for alarm at the moment," said Richard Neher from the Biozentrum of the University of Basel. Andreas Bergthaler from the Austrian Academy of Sciences in Vienna does not consider the current development to be "incredibly alarming" either, noting it is not uncommon for mutations to appear among pathogens.

To tamp down the spread, Britain announced a new lockdown for London and parts of south and eastern England starting Sunday and over the Christmas period. The measures affect 16 million people.

With some exceptions, in the hardest-hit areas, households are not allowed to mix, people may not stay overnight away from home and all non-essential shops are closed.

French President Emmanuel Macron and German Chancellor Angela Merkel spoke with top European Union leaders by phone on Sunday to iron out a joint approach, and Germany, which currently holds the rotating EU presidency, has called representatives of other member states for an emergency meeting on Monday over the new coronavirus variant.

The European Commission is in contact with the member states to increase the flow of information and help with coordination, a source in the executive branch told DPA.

But Britain's alarm late Saturday prompted countries in the European Union to take their own actions on Sunday, ordering travel restrictions to prevent the variant from spreading.

The Dutch flight ban is set to last until January 1, while Belgium's suspension affects all flights and trains – including the important Eurostar route – and kicks in at midnight (6 PM EST).

France has imposed a ban on travel from Britain by land, sea, rail and air that will initially last 48 hours. Only unaccompanied cargo is allowed, according to the French prime minister's office.

Meanwhile, Britain's important Port of Dover has banned all outgoing freight for 48 hours.

Freight from coming to Britain from France will be allowed, but there are fears truck drivers will not travel to avoid being stuck in the country, the BBC reported.

The last train from Britain through the tunnel to France departed London on Sunday evening, according to operator Getlink.