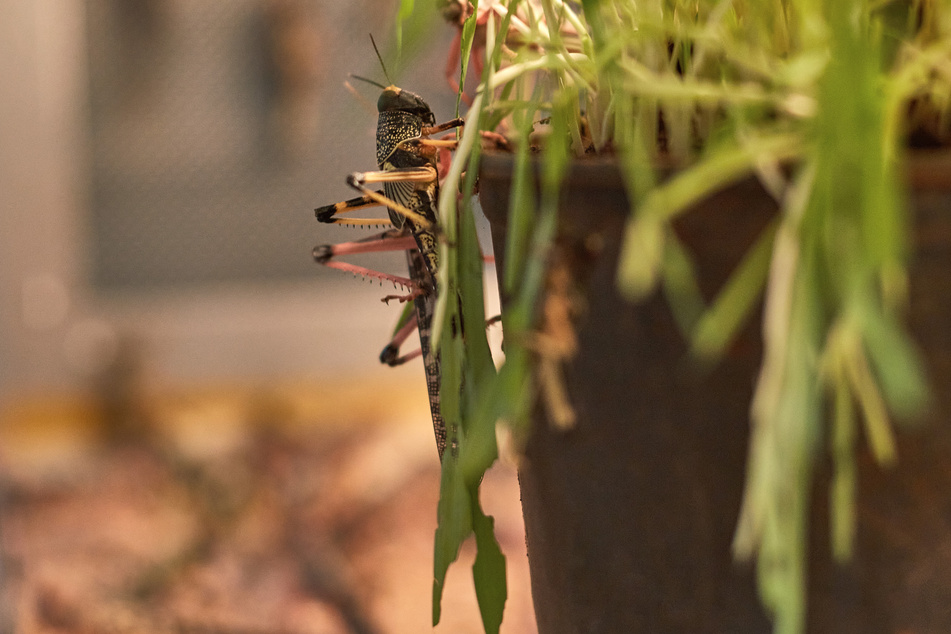 Are insects the food of the future? Researchers are looking into using insects as a protein supplement.

Nairobi, Kenya - Cookies make everything a bit better. But how would you feel about a cookie made with insect oil instead of butter? Researchers in Africa are working to make this a reality.

They are trying to make cooking oil from desert locusts (schistocerca gregaria).

The Cameroonian entomologist Chrysantus Tanga is a fan. "As a child I caught locusts for fun and ate them straight away," he says. "They are so beautifully crunchy." Tanga works in Kenya's capital Nairobi for the International Centre of Insect Physiology and Ecology (ICIPE), a pan-African research institute.

For more than 20 years the institute has been breeding desert locusts for research purposes.

Tanga and his colleagues have discovered that insect oils, for example from desert locusts, contain more omega-3 fatty acids, vitamin E and antioxidants than vegetable oils. According to the researchers, they are safe for human consumption.

It takes about 44 pounds of dried locusts to make 1/4 gallon of raw oil. The oil is dark brown and smells a lot like fish. The ICIPE cafeteria in Nairobi is already serving cookies and breads that were baked with locust oil.

The only indication that these aren't ordinary pastries is the raisin-like decoration on some of them. It turns out they are made of fried locusts.

Not all the products are edible yet, however, and the cooks are still experimenting.

But some dark breads already have a pleasant nutty taste. The demand for insect products could be especially great in Africa, with its rapid population growth as well as the risks of food shortages.

The first thing people tend to associate with desert locusts is a plague. Since the end of 2019, huge swarms of the insects have been migrating over East Africa. Kenya, Ethiopia, and Somalia have been hit the hardest.

When the locust swarms come farmers and herders can only watch on helplessly as the insects destroy their fields and pastures. Their livelihood is acutely threatened by these events.

So why not just capture the swarms and turn the pests into oil? This isn't very practical, according to insect expert Tanga. "The insects migrate, often to inaccessible or even dangerous areas. We cannot reliably predict when they will be found where and in what numbers."

Xavier Cheseto, his colleague, also warns that the locusts could have been sprayed with pesticides, which could make them dangerous for human consumption.

It would be more feasible to breed the insects. They can be cultivated quickly, cheaply and don't take up a lot of space. Locusts are ready to reproduce within two weeks.

In the ICIPE laboratory, an average of 12,600 locusts are growing in 42 cages, according to Tanga. A female locust lays an estimated 300 eggs during the course of its life, three quarters of which survive. Locust breeding is also considered more environmentally friendly than cattle farming, for example. It emits 83% less methane, Cheseto points out.

Another advantage is that desert locusts are 62% protein. They could therefore either be used as an alternative source of protein to meat or as a replacement or supplement for soybeans. After all, entire forests are often cleared for the cultivation of cattle or soybeans.

In sub-Saharan Africa, insects have always been part of the human diet. More than 500 insect species are consumed on the continent. Now, an increasing number of researchers are trying to develop food from insects suitable for the modern diet. Soap and biofuel could also be made from them.

ICIPE is currently negotiating with African governments and private companies to make its research results applicable and to promote an insect-based industry. According to the institute, there are already more than 50 companies in Kenya currently producing insect-based animal feed.

Nutritional scientist John Kinyuru from the Jomo Kenyatta University in Nairobi praises the nutritional value of locust oil. He says there's a lot of interest in moving to the stage of industrial production. "Currently, there are not enough farmers producing the insects in sufficient quantities," he says.

He finishes with a warning: "You have to be extremely careful that the locusts don't break out: otherwise you'll create a plague."