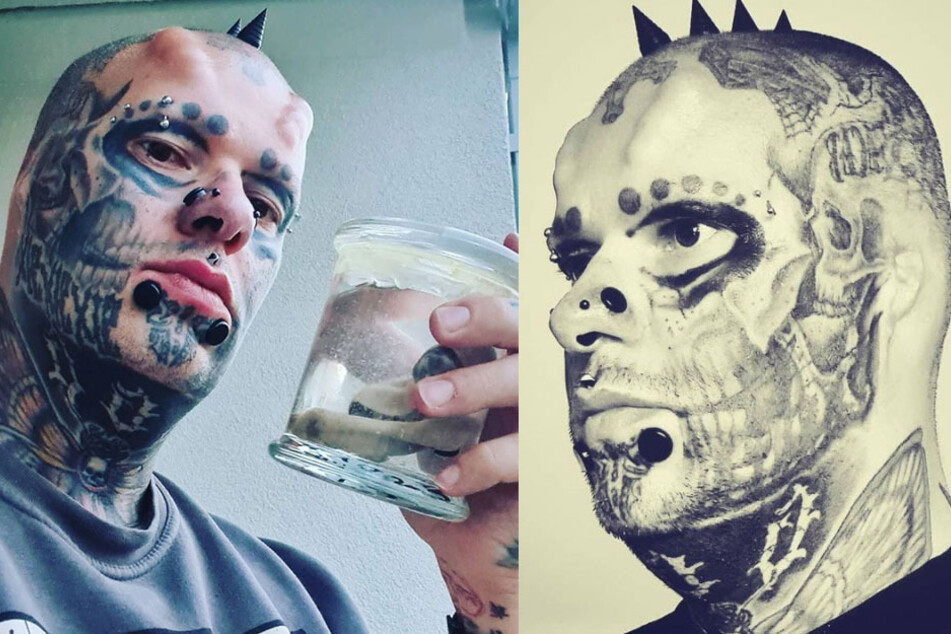 One man has spent over $8,000 over the last 14 years on body modifications and tattoos to do his persona, Mr. Skull Face, justice!

Finsterwalde, Germany – One man has spent over $8,000 over the last 14 years on body modifications and tattoos to do his persona, Mr. Skull Face, justice!

Sandro is 39-year-old and will stop at nothing to reach his goal. He even chopped his ears off entirely to look more like the part.

The German native didn't just discard his severed body parts, though. Now, he just keeps them in a jar as memorabilia.

Out of the 17 major body modifications he's gotten, including subdermal implants in various places and gauges under his bottom lip, Sandro told the Mirror his favorite was going earless.

He is also heavily covered with tattoos and various piercings that add to the skull aesthetic he's going for. While his appearance often provokes negative reactions, it isn't something that Sandro minds.

"If people stare I really don't care. If someone says something like 'you are a sick old man' then I will answer with 'thank you for the compliment'", Sandro told the Mirror.

Although his progress is impressive, Sandro is nowhere near the end of his ongoing transformation. Next, he hopes to get his nose cut off and add some more ink to his body.

With each new procedure, Sandro's self-confidence grows, although he admits his appearances have given him past troubles in his love life.

"I think that it has of course had an effect on me finding a relationship, as it scares most people off, but of course, many people also find it very interesting," he said.

Above all, Sandro hopes people can see beyond his scary appearance and get to know him for whom he truly is.