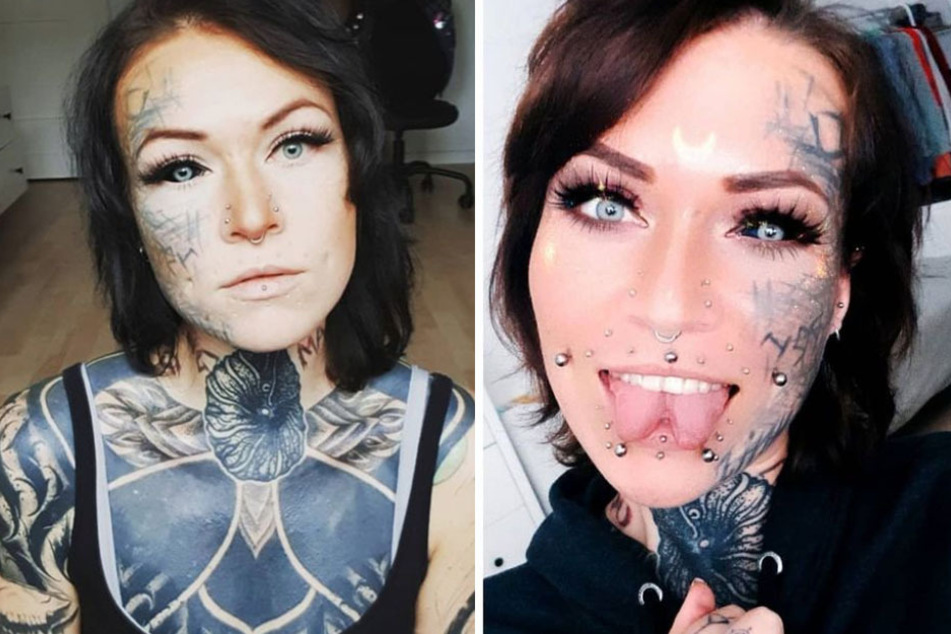 She got her first piercing at 13 – now this woman is addicted to body modification!

After learning that change is good at a young age, one woman has her sights on changing her body one black out tattoo at a time.

Berlin, Germany – Tattoo Artist Balea Scarleg knew she was hooked on body modifications after her first piercing at age 13. Now, she's spent over $11,000 to beautify her body the way she sees fit with piercings and tattoos.

There hasn't been a day spent where tattoo artist and TikToker hasn't thought about ways to change her body. When she finally turned 18, the Balea set out to get her first tattoo, one that covers her entire stomach.

Now 30, she's since had one of her eyeball tattooed black, numerous subdermal piercings, and large parts of her body inked.

Having gone through some modifications at a young age, the German has a different view on the matter, telling the Daily Star, "I had my earns pinned back at six and wore a brace for many years, so I noticed early on that to change is something good."

Though her reasons for getting pierced and tattoos in different places might have changed over the years, the underlying act of facing and fighting pain is still a major driving force for Balea.

At first look, it's easy to assume the most painful and outlandish tattoo she's gotten is her eyeball, which the Berlin native insisted was "absolutely painless".

Each body modification is a victory

Balea believes that each addition to her body is her latest extreme. She soon went several steps further than piercings and tattoos, getting her tongue split, her ear lobes cut off, scarifications, as well as and suspension hooks.

Of her latest interest in black-work tattooing, Balea said, "It hurts more with every session, but after a really painful session I'm so proud of myself. Like 'yes, I did it.'"

A lot of her clothing blends in with her chest and back tattoos, giving her a special aesthetic that's unique and very personal to her.

Like anyone who's ever changed the skin they're in and posted publicly about it, Balea does endure some internet trolling, but has vowed not to let misinterpretations or judgement of others deter her from her body goals.

More on the topic Tattoos: