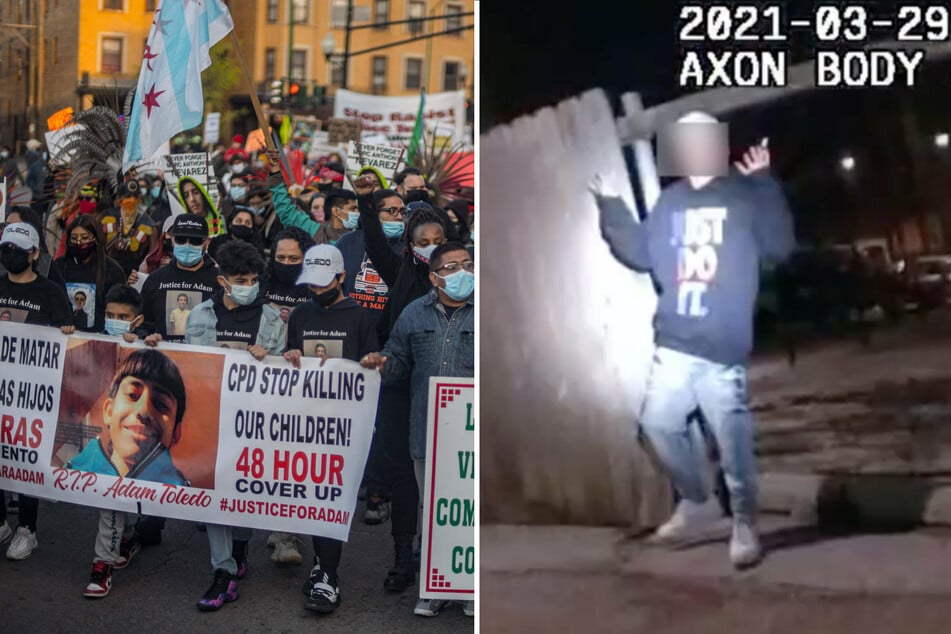 Hundreds of people gathered in Logan Square Park on Friday evening to demand justice for 13-year-old Adam Toledo and all victims of police violence.

Chicago, Illinois - Hundreds of people gathered in Logan Square Park on Friday evening to demand justice for 13-year-old Adam Toledo and all victims of police violence, according to organizers.

By 6 PM, the rally, peaceful but passionate, was underway, and speeches had started at the park.

As the sun dipped low, speaker after speaker lambasted the police over the sound of hovering helicopters, as dozens in the crowd filling the park and spilling into roadways hoisted signs calling for the abolition of the department.

The gathering, advertised widely on social media, was the first major demonstration against the Chicago Police Department since the city on Thursday released the troubling video of Toledo’s killing.

Toledo was fatally shot by police in the early morning hours of March 29 in the Little Village neighborhood during a confrontation with police responding to reports of shots fired.

Some in the crowd said they came out to send a message to the city.

"I feel it’s important to stand in numbers (to make city officials) understand that excessive policing is not what we need in our communities," said Laura Machado (25) who said her family lives in the Toledos’ apartment building.

"We need to invest in stronger systems that uplift, instead of tear down, our children," Machado said.

"It made me sick to my stomach, it made my blood boil," Sanchez said.

The crowd began marching about 7 PM. The marchers headed west, in the general direction of Mayor Lori Lightfoot’s home, which is also in the Logan Square neighborhood.

Thursday night saw smaller protests in Millennium Park, at police headquarters in Bronzeville and in front of the Fraternal Order of Police Lodge in the West Town neighborhood, as well as solemn vigils in Little Village, where the fatal shooting took place.

"The Toledo family implores everyone who gathers in Adam’s name to remain peaceful, respectful and nonviolent and to continue to work constructively and tirelessly for reform," they said.

Bodycam video recorded in the early morning hours of March 29 shows Officer Eric Stillman chasing Toledo down an alley in the 2300 block of South Spaulding Avenue, shouting for the teen to stop and show his hands. In a frame-by-frame viewing, a pistol-shaped object appears to be visible in Toledo’s right hand behind his back as he pauses near an opening in a fence and turns his head toward the officer.

Surveillance footage from a different camera shows the teen stopping with his right arm behind the fence and making a throwing motion just before he turns back toward the officer and raises his hands.

On Stillman’s camera, Toledo’s hands appear to be empty at the moment the officer shoots him. Later in the video, an officer shines a flashlight onto a pistol behind the fence where Toledo had been standing.