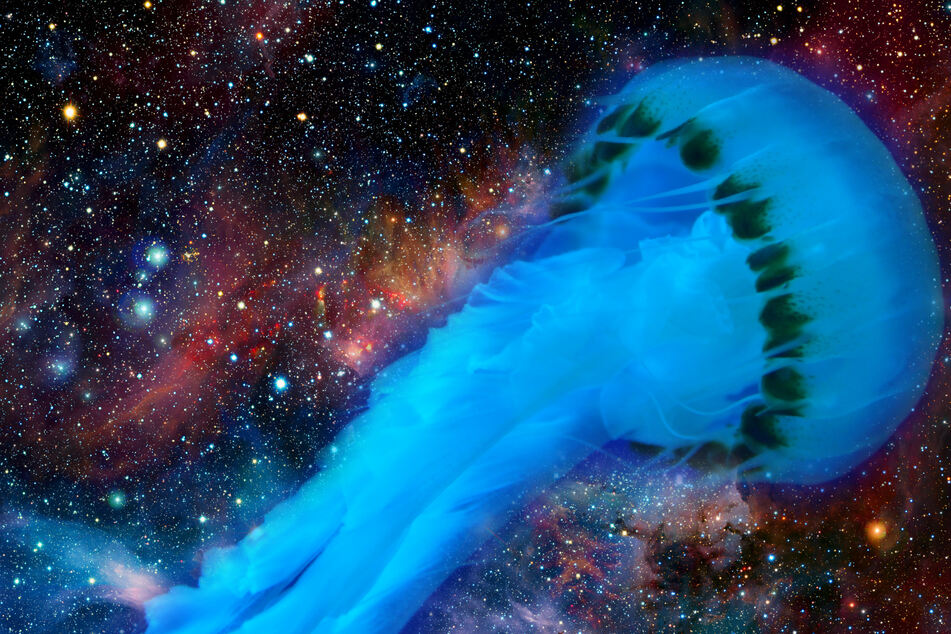 Australian scientists have measured radio waves from a distant galaxy cluster that take on a strange animal shape.

Australia - Australian scientists have measured radio waves that originate from a distant galaxy cluster and take on a strange animal form.

We know of animal constellations in the shape of a lion, bull, or crab – but a jellyfish? That's exactly what researchers have now discovered with a radio telescope in Australia.

According to an article in the Astrophysical Journal, the measured radio waves form a kind of jellyfish with a large head and long tentacles.

That's why scientists named the discovery USS Jellyfish. In this case, USS stands for ultra-steep spectrum because the shape of the radio waves rises and falls very sharply.

According to the report, the readings show a cluster of galaxies nearly 340 million light-years from Earth, which itself measures a width of just under 1.2 million light-years. That means the space jellyfish is huge, but also impossible to ever reach.

But what does this discovery mean? Did aliens paint a jellyfish in the night sky?

Jellyfish don't come from aliens. They come from black holes...

No, the signals most likely do not come from aliens. Instead, the origin of the radio waves probably lies in supermassive black holes that are located in the center of the jellyfish.

According to the researchers' calculations, these gigantic black holes formed almost two billion years ago, generating rings of gas around them, which in turn threw a lot of matter in all possible directions.

This matter contains tiny electrons that are accelerated by a gas cloud and whiz through space at almost the speed of light, emitting radio waves – and that's exactly what the Australian scientists have now measured.

It seems humankind will have to wait a little longer for messages from aliens, but it's still impressive what people can discover in outer space.