How to help a cat in heat: Symptoms and home remedies

Cats in heat can show some pretty alarming symptoms and behaviors. How can you help a cat in heat with some home remedies?

Now and then, you may notice that your cat has started to display some rather alarming behavior. It is likely that your cat is in heat, and you could be in for a rough ride. Here's how to recognize – and help – a cat in heat.

Once the season of love has come around, even the most peaceful cats may become absolutely wild.

These loudly meowing kitties, sticking their bums up continuously, are probably in heat. A cat in heat is likely preparing itself to mate, and its behavioral changes are stark.

In this cat guide, TAG24 will take you through everything you need to know about cats in heat. What are the symptoms of a cat in heat, and what can you do to alleviate their excitement and discomfort?

What is a cat in heat?

The term "cat in heat" specifically refers to a female that has reached sexual maturity, is fertile, and wants to mate. Male cats also display certain behaviors, such as marking their territory, once they become capable of sexual activity. Neutered cats will not display these behaviors, as the process of neutering stops them from being able to produce the sexual hormones that cause them to go into heat.

Why does my cat have a saggy belly? All about a cat's primordial pouch 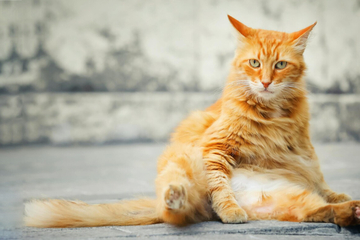 Why do cats groom and lick themselves? 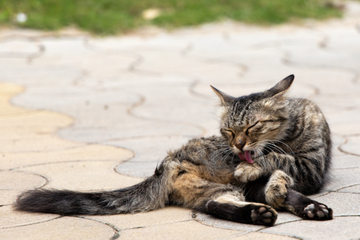 Why is my cat sneezing a lot, and should I be concerned? 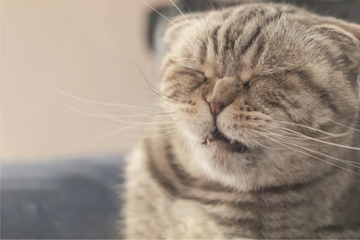 Why is my cat twitching: Harmless quirk or health problem? 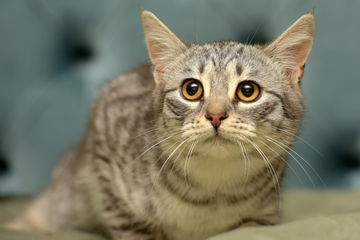 Do female cats spray when in heat?

Cats urinate and spray more often when they are in heat. This means that your female kitty pushes up her bum, with her tail sticking straight up into the air, and releases urine. Male cats will generally urinate to mark their territory, but when a female does it in heat, it is for a very different reason.

The pheromones contained in your cat's pee when it sprays are meant to attract male cats. In such a case, it is common that the cat won't adhere to their usual toilet training, opting to instead spray any nearby object. This can be quite inconvenient and rather gross, so it's another good reason to have your cat neutered.

Do cats bleed when in heat?

It is very unusual and uncommon, but possible for your cat to bleed when it is in heat. You may notice a small amount of blood somewhere where your cat commonly lies down for long periods of time. In such a case, you should make sure you get your kitty checked by a veterinarian just to be safe.

How often do cats go in heat and for how long?

Cats will generally go into heat around twice a year, often in spring and autumn. It is generally accepted that cats are triggered into heat by sunlight, which explains why it is particularly common for cats' hormonal cycles to be activated in springtime.

If a female cat is in heat and has no sexual partner to mate with, she may be triggered into heat quite often and for longer periods each time.

What do cats do when they are in heat? What are the symptoms?

Cats emit pheromones and communicate with other cats through smell. Glands on their paws and rear end release these particular smells and pheromones, odors which change significantly once the cat is in heat.

When a cat is in heat, it may exhibit the following symptoms:

If your cat gets considerably more excited, grumpy, and aggressive, it may have entered heat. Try not to worry and get it neutered as soon as possible.

How to help a cat in heat

The most important thing you can do to help a cat in heat is have it neutered at the earliest time possible.

This will not only improve your feline's behavior, but also will stop them from getting pregnant and having kittens as well. Unless you have the intention to look after a litter of kittens, you're going to want to be careful.

When a cat is in heat, it can remain agitated for a very long period of time, so having your cat checked by a veterinarian is a good idea. They will be able to help you alleviate the symptoms and will give you advice on when and how you can have your kitty desexed.

Home remedies for cats in heat

When your cat is in heat, you're hardly going to be able to just jump into the car and go get it fixed immediately. That's just unrealistic! Instead, you should try out a few home remedies and see if you can help.

Here are a few ways to help a cat in heat:

Think about it this way: your cat will be feeling rather poorly when it is in heat. Give it some treats and cuddles to make it happy!

Important: We would recommend getting the advice of a vet. They will be able to provide you with highly effective ways to help your cat when it's in heat.

Beware when your cat is in heat!

Cats are incredibly adorable, but they can be real monsters when they are in heat. Beware of your kitty's anxiety levels during this period. They can get rather frustrated, which can make them act out aggressively. They need to be handled with a little bit of extra care during this time.

The best solution for a cat in heat is, of course, to have it professionally neutered or spayed by a veterinarian. This will prevent any future problems you may have with your kitty, and will greatly improve your cat's quality of life.