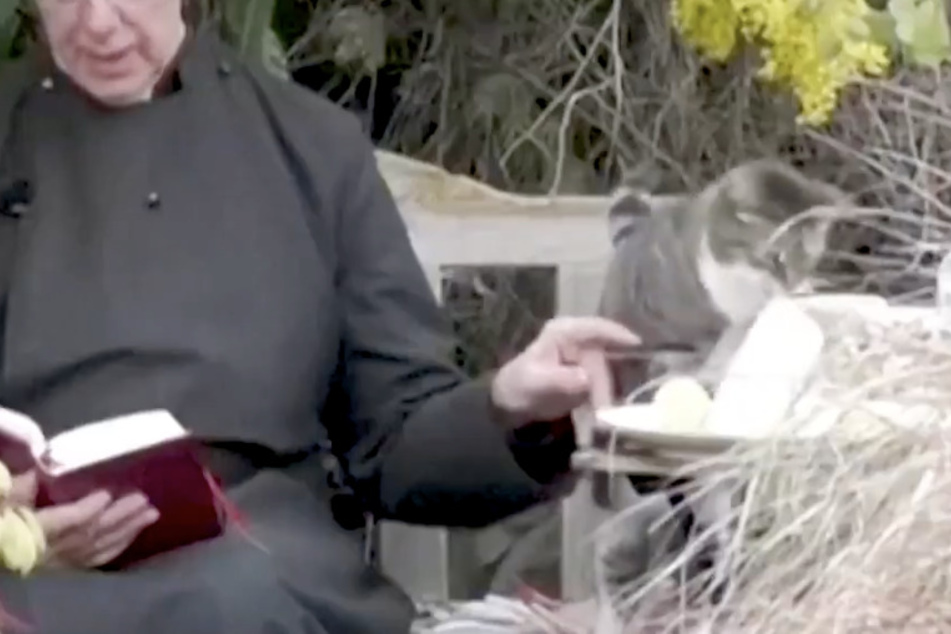 A cat showcases his fur-ocious appetite while stealthily grabbing a sweet treat in the middle of prayer.

Canterbury, England - A cat made its way onto a morning prayer broadcast at Canterbury Cathedral in attempts to take a bite from a conveniently located plate of pancakes.

Tiger, a cat who prowls around the cathedral grounds, was on a serious, and successful, mission for pancakes while the Dean of Canterbury Cathedral was offering a morning prayer for a live broadcast Friday morning.

In this adorable video, Tiger can be seen gently jumping up onto the same bench as the man in what looks like a garden. He instantly spotted the plate of pancakes delicately set upon an iron table. From there, it was game on.

After a few loving pets and subtle acknowledgement, Tiger must've sensed the prayer was coming to an end, and it was now or never if he wanted to get his paws on those pancakes.

The cat then swiftly snags one off of the plate, a move that is almost unseen by the naked eye. That is, unless you've watched the video multiple times through and now cannot unsee Tiger's stealth move.

Rather than getting upset at Tiger, the dean takes note of his furry friend, and says "it's pancake day for him, as well, so we're not too sorry about that."

This isn't Tiger's first appearance on a live broadcast at Canterbury Cathedral, and it more than likely won't be his last.