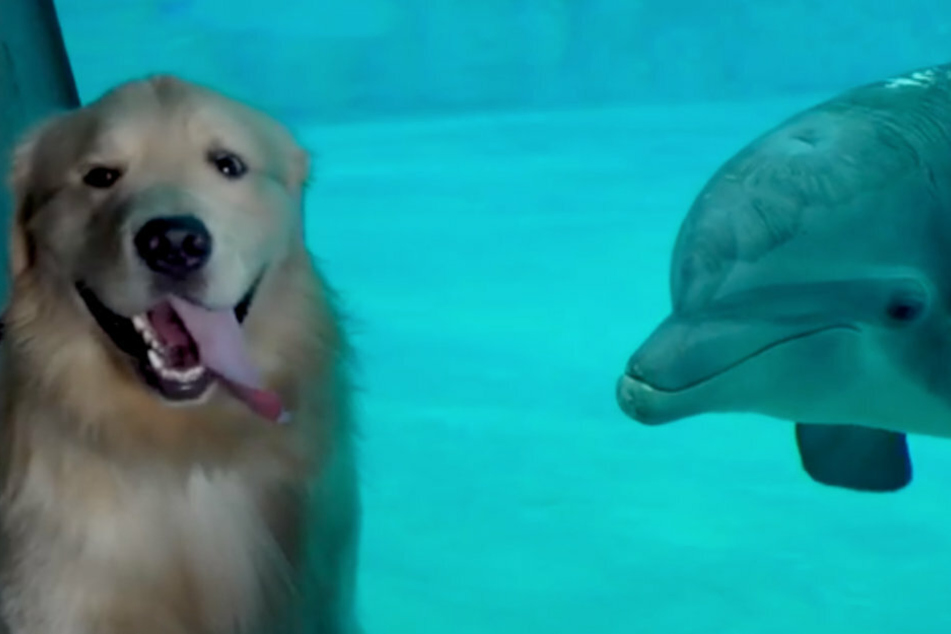 Kevin and Winter struck up a lasting friendship online before meeting face to face in Florida.

Clearwater, Florida - Golden retriever Kevin and Winter the dolphin make a very special pair. The two first met online and it didn't take long before they just had to see each other in person.

The Marine Park in Clearwater, Florida, is the setting for this unlikely story. Two friends that couldn't be more different started their relationship via webcam.

It all started when Katy, the rescued dolphin's handler, contacted Kevin over Instagram. The dog is famous on the platform, where he has over 200,000 subscribers on his channel agoldennamedkevin. He makes everyone smile with his adorable costumes, all hilariously captioned by his owners.

Kevin loves wearing his favorite duck hat and it turns out Winter is also a big fan of ducks. What better reasons for them to meet?

Soon, Kevin and Winter had their first video chat. All dressed up with his duck hat of course, the golden retriever sat in front of the screen while his new marine mate splashed around in the water.

Winter is a real star, but he's been through a lot. The Atlantic bottlenose dolphin lost his tail after getting tangled up in a crab drop net.

But thanks to the care of the Clearwater Marine Aquarium and a prosthesis, he was able to recover. Not long after, he played the leading role in the movie My Friend the Dolphin alongside Morgan Freeman (83).

Kevin visited his buddy in Florida

The golden retriever was soon on his way to Florida with his owners, naturally not without his duck hat.

At last, he was face to face with Winter for the first time, separated only by the glass. The dolphin swam around in his tank, delighted to finally meet his online friend.

But it got even cuter. The diving doggy was allowed to go for a swim with Winter and Katy, the caretaker who had invited him.

The images show the happy trio swimming and laughing in the pool, together with Winter's favorite toy - a rubber duck!

Kevin made other friends too

You can't help falling for Kevin. Just ask the pelicans and manta rays he also befriended on his visit. Everywhere he went, he wagged his tail enthusiastically among his new pals.

The videos spread a lot of joy over the internet. This visit will certainly stay with Kevin, who reminds us that friends come in all shapes and sizes.