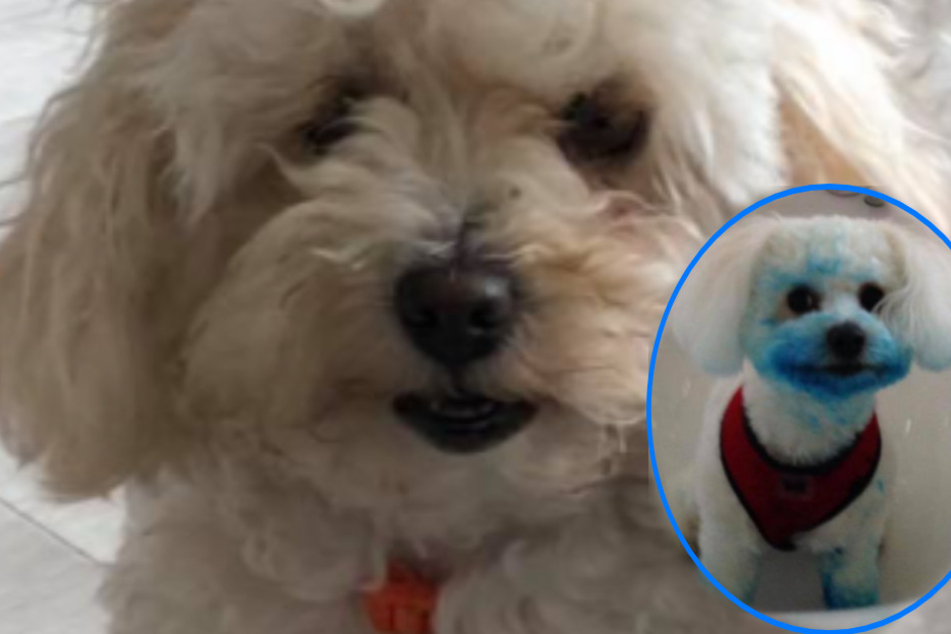 This usually white Bichon Frise dog from Falkirk, Scotland, is going for a new look.

Puppies are usually playful and get up to all sorts of shenanigans. Little Rosie grew out of puppyhood seven years ago, but she's still got a mind for mischief between her floppy ears.

Owner Tracey Collin (50) is used to seeing Rosie bursting with curiosity, and this time was no exception.

The day after Tracey took Rosie to the groomer, she let the dog out of her sight for a few minutes. Rosie has apparently perfected the art of exploiting such moments of freedom.

On this occasion, Rosie took advantage of the time to give herself a more individual look.

When Tracey entered the kitchen, she saw something she could not understand.

Owner can't believe her eyes: "She looked like a Smurf!"

Tracey could hardly believe it. She had just spent the equivalent of $53 for styling, washing, and blow-drying Rosie.

But what had happened? While Tracey left Rosie unattended, the dog ransacked the kitchen trash can. Among the contents was an ink cartridge that was not quite empty.

"I went into the kitchen to make myself a cup of coffee. When I arrived at the glass kitchen door, I had to look twice. I thought to myself: 'Why is the dog so blue?' She looked like a Smurf," Tracey told the Dailyrecord.

And Rosie? "She actually seemed very pleased with herself in a way."

Tracey solved the mystery when she spotted the blue ink cartridge. Rosie's snout and claws were dyed mostly blue. Is it Halloween again?

Rosie's Smurf costume was not easy to remove.

Tracey brings her dog back to the groomer

Tracey put her beloved dog into the bathtub, but washing Rosie didn't help. The following day, they returned to the dog salon.

But the groomer couldn't fully undo the damage either!

For another $53, Rosie's coat was trimmed to remove most of the blue coloring.

"Rosie is a cheeky little lady," Tracey said of her sneaky pooch.