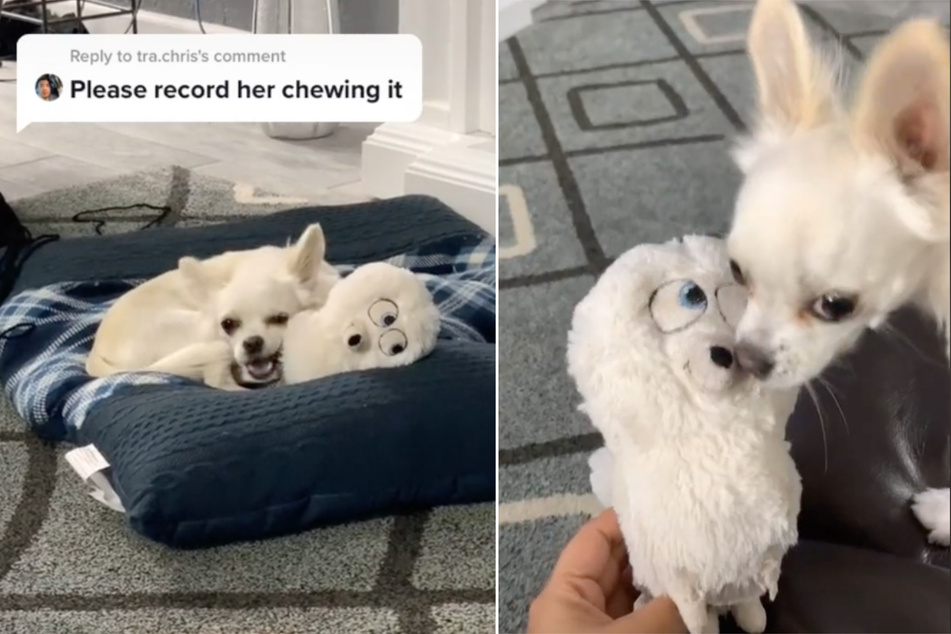 Why is this dog only nibbling off one of her toy's legs? This little four-legged friend's puzzling behavior is currently causing a stir on TikTok.

Internet - This little four-legged friend's puzzling yet cute behavior is causing a buzz on TikTok.

Dogs love to chew on things, but this little guy named D.D. only munches on a specific body part of her chew toy.

In a recent TikTok video, her owner ritajtor lets the pooch explain the heartbreaking reason behind her targeted nibbles.

It's clear from that clip that D.D.'s only chows on one of the white toy's legs. Her owner, who's holding up the chew toy, says: "As you can see she doesn't chew anything else but this arm right here as if wanting to take it off. I don't understand why. D.D. can you please explain that to me."

Then the camera pans away from the stuffed animal with the gnawed leg and focuses on the dog.

And the reason for D.D.'s preference becomes abundantly clear: she is missing a front leg and just wants her best buddy to look like her.

The TikTok video already has more than one million views and 280,000 likes, and it was posted barely three days ago.

There is also already a second clip of D.D. still chewing on her toy. This time, she's working on another leg.

The comments section below the posts are full enthusiastic comments from other TikTok users. One wrote, "Awww, she wants it to be like her.. that melted my heart."

Another shared that D.D. isn't the only dog that creates toys in her own image: "My dog does the same thing!!!! She's missing a back leg and the stuffed animals are missing back legs." A third was moved to tears. "Stop I started crying how cute."

Even though she only has three legs, D.D. is full of energy and happiness, which is clear from a third video by ritajtor, which shows the little bundle of energy having a lot of fun in the snow.