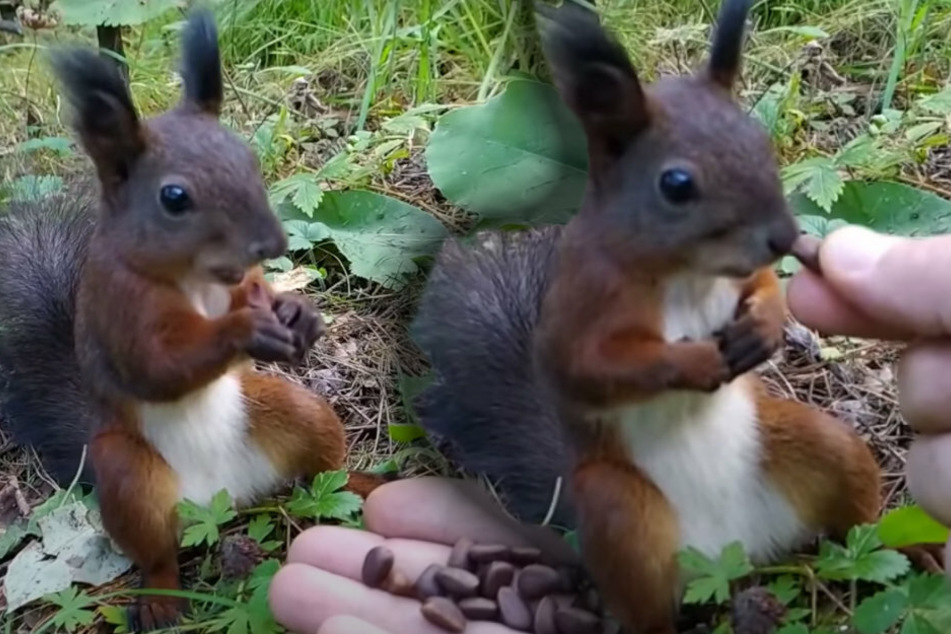 A video of a squirrel eating snacks out of a man's hand and then suddenly stopping still has gone viral.

Krasnoyarsk, Russia - A squirrel happily indulges in its favorite snack from a man's hand, but a few nuts in, it suddenly freezes with a shocked look on its face. What's going through the little creature's mind?

In the footage, a Russian man attracts a cute squirrel with a handful of nuts.

The fluffy rodent cheerfully grabs a snack and nibbles at it contently. But then it simply stops eating or moving altogether.

The man tries to snap it out of its trance by shaking the nuts at it, but the squirrel just stares into space, seemingly in a complete state of shock, only pulling its little paws towards itself.

Even when the man nudges it a little, the squirrel remains catatonic. The attempts get increasingly creative: he pushes a nut up to the critter's nose and even begins tucking a few treats under its arms. But nothing seems to be doing the trick.

A full two minutes later, the squirrel finally takes a few extra bites, stands up straight, and then scurries off as if nothing happened.

Why did the squirrel freeze?

The viral video has well over a million views.

Users joked that the animal might have been going through an existential crisis.

Some noticed that the animal seemed to hear something moving in the forest, so it could have been a self-defense mechanism.

Others said it was a simple system error: "squirrel.exe has stopped responding. Try restarting the program."