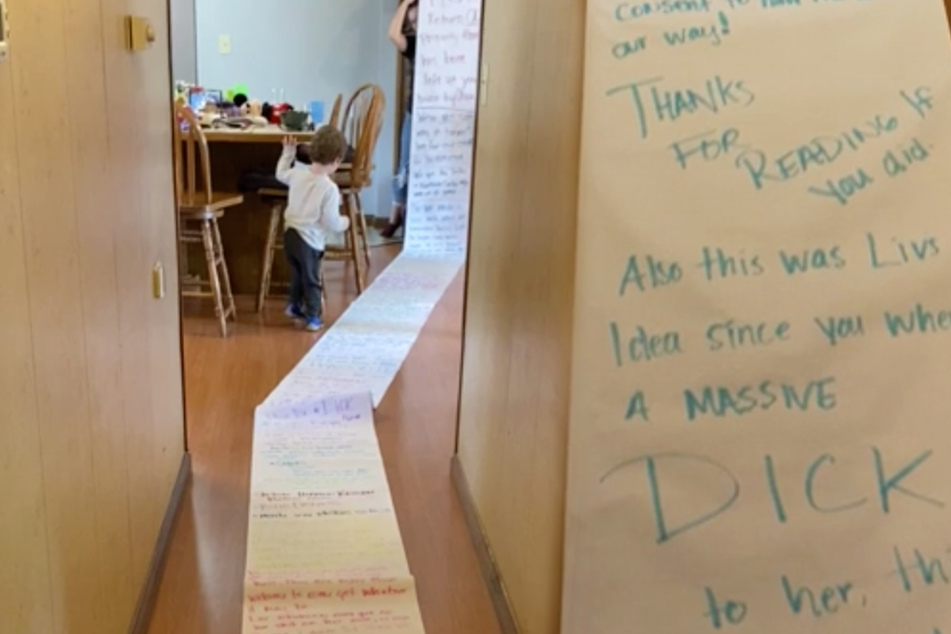 A disagreement over toys led to a foul-mouthed rant that was written on an incredibly long scroll.

Internet - Children often fight over toys, and they sometimes rope their parents into it. But one such disagreement led to an epic foul-mouthed rant that could only fit on a mile-long scroll.

On September 23, Casey Rae, known as Readives91on Reddit, received this War and Peace-sized "note". Casey immediately took to Reddit and shared a video which shows the letter stretching over several yards and covering half of her apartment.

The sheer size of it isn't where the craziness ends.

Although it's impossible to make out what most of it says – and Casey has no intention of transcribing thousands of words – the message is definitely not  friendly. It contains plenty of curses and insults, written in different colors, presumably as it took several pens to finish.

The baffled woman explained that she received the letter from her neighbor, who was apparently just acting on her 7-year-old daughter request to write a "mean note" asking for her toys back.

But Casey insisted that, although her children play with the little girl and occasionally leave toys at each other's places, she always makes sure to return any possessions.

She had also just recently spoken to the furious mother and told her to come by and look for the toys in question herself.

Given what the woman was working on, she probably just didn't have the spare time to check Casey's apartment.

Aside from expressing their amusement and concern for the neighbor's mental health, many users came up with ideas on how Casey should respond to this madness:

Meanwhile, the post has gained more than 23,000 upvotes and certainly does the "Insane parents" Subreddit justice.