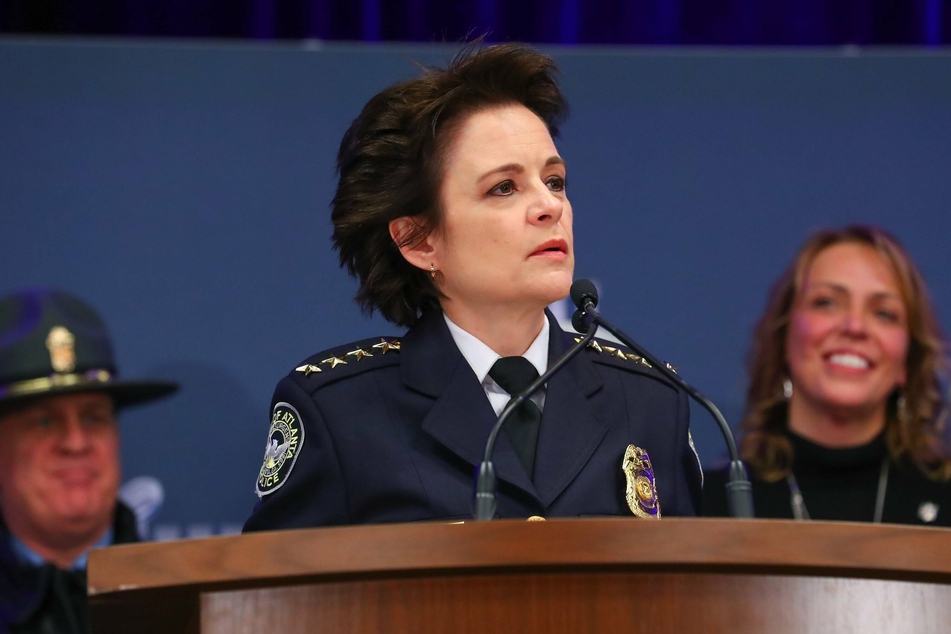 Erika Shields, Atlanta police chief at the time of Rayshard Brooks's death, will take over the Louisville Metro Police Department.

According to the New York Times, Shields will be the fourth chief to lead the department since Breonna Taylor's shooting in Louisville in March 2020. Shields is set to take office on January 19.

In her previous post as police chief in Atlanta, Georgia, Shields was embroiled in controversy following the police shooting of a Black man named Rayshard Brooks (†27).

Another New York Times article details the events of Brooks' death: on June 12, Officer Devin Brosnan received a call that a man was asleep in his car, blocking the drive-through lane at a local Wendy's. After subjecting Brooks to sobriety tests, officers began to handcuff the man (without first telling him he was being arrested).

Brooks defended himself, hitting one officer and grabbing another's taser. One of the officers tried to hit Brooks with a taser as the latter ran away. Brooks turned to fire the stolen taser at the men, when Officer Garrett Rolfe discharged his own taser as well as two shots from his handgun. The bullets hit Brooks in the back.

As Brooks lay on the ground bleeding to death, the white officers allegedly kicked him and stood on his shoulder. They failed to provide medical assistance for over two minutes after the shooting. The incident was captured on video.

The decision to hire Shields to head Louisville's police department is remarkable, especially considering the city is facing its own troubles over the police killing of a Black woman.

An emergency medical worker, Breonna Taylor (†26) was inside her Louisville home with her boyfriend, Kenneth Walker, when police forced entry. They wanted to search the premises as part of a botched drug raid.

Officers claimed they announced themselves as police, but Walker did not hear them do so. Thinking there was an intruder at the door, he fired a warning shot. The police returned with 36 shots. Taylor received six of those bullets and died.

No law enforcement officers were charged for their involvement in Taylor's death.

Louisville has been racked by civil unrest since the shooting, and Taylor has become an international symbol for police violence against Black Americans.

Shields must reckon with backlash from Black Americans in Louisville

Louisville Mayor Greg Fischer announced the decision to hire Shields at a press conference on January 6. He praised his selected candidate as "an experienced, progressive, reform-minded leader who believes in the role of policing."

Police departments nationwide are having an increasingly hard time filling vacancies for their top positions. Departments under heightened scrutiny for racial violence face particular difficulties: "A host of qualified chiefs with progressive views, including Ms. Shields, have been sidelined after high-profile incidents of police violence, often sacrificed by elected officials looking for political cover," the New York Times explains.

Nevertheless, Shields faces backlash from many Black leaders, who say she has not been progressive enough to stem violence coming from within her own ranks. Milly Martin, a political activist in Louisville, told reporters: "As the Black community, why would we want a woman like Erika Shields coming to our city to be the next police chief when clearly, clearly she could not get Atlanta P.D. under control?"

It is unlikely the new police chief will be able to leave the past behind her. Gerald Griggs, second vice president of the Atlanta chapter of the NAACP, said: Shields “can expect activists from Atlanta to be in Louisville — we want to hold her accountable.”