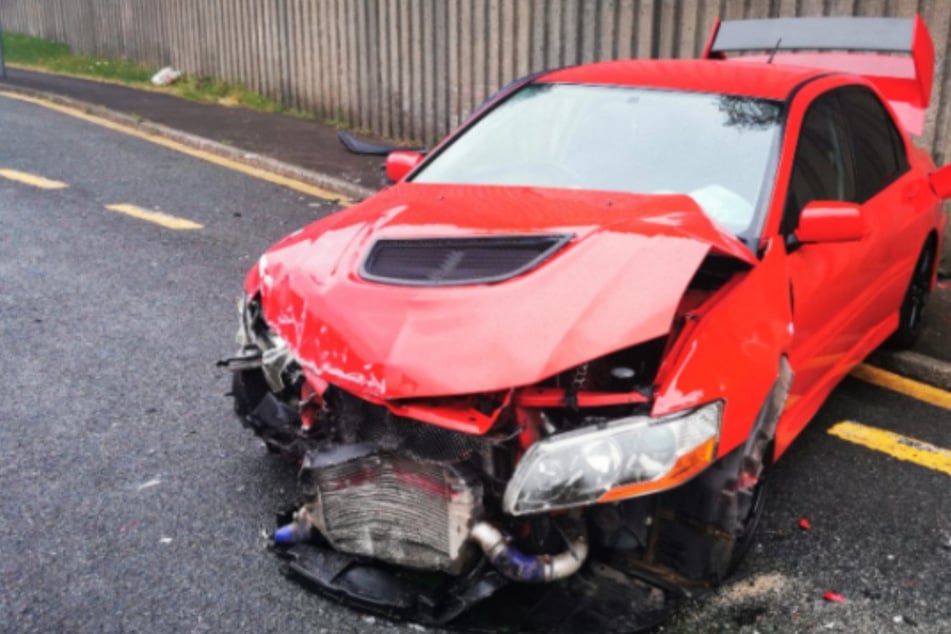 Man wins brand-new sports car and totals it right away!

Rhydyfelin, Wales, UK - Adam Griffiths was the ecstatic to be the winner of a brand new Mitsubishi Lancer Evolution IX, but his luck turned as soon as he got the sports car.

Adam Griffiths' dreams came true on April 26 when he won a brand new Mitsubishi Lancer Evolution IX from Dream Car Giveaways, which regularly raffles off cars in prize draws. The vehicle was valued at nearly $42,000.

Griffiths couldn't wait to take his prize out for a spin, and just two days after his win, he grabbed a friend and sped off down Cardiff Road in Glyntaff, a small Welsh village in the UK.

But his good fortune didn't last long. As the 27-year-old admitted to Wales Online, he wasn't exactly being attentive while driving, and he proceeded to completely total the car on a narrow lane bordered by high concrete walls!

"It's my fault, I hurt myself in this crash and I've got to deal with the consequences. I'm just lucky that my passenger was able to walk away – the car can be replaced but some things can't," he shared.

But one thing is currently weighing even more heavily on the young man's mind: he shared that many people have written him hate messages because he apparently didn't take enough care with his winnings, which is why he had to delete his account on Facebook.

"I've had people harassing me, people contacting my mother saying I should die and stuff. It's all because I won the car. If I had paid £25,000 for it and this had happened no one would be interested," Griffiths said.

Winner was contacted by Dream Car Giveaways after the accident

"I was breathalyzed, drug tested and everything at the scene. People are saying I didn't have insurance and ran away from the scene and stuff. It's just not true. I have the full documentation and everything," Griffiths insisted.

A spokesman for South Wales Police confirmed to Wales Online: "The driver and male passenger suffered minor injuries in the crash. The 27-year-old local man who was driving the car has been reported for driving without due care and attention."

Dream Car Giveaway also commented on the case, "All our cars are thoroughly serviced prior to being collected by winners. The Evo won by Adam on Monday night was given an MOT the day before collection, as well as being provided with a winners sheet urging caution when handling a high-powered vehicle."

The company also said, "We’ve spoken to Adam and we're relieved to hear he is OK after what looks like a terrible accident."