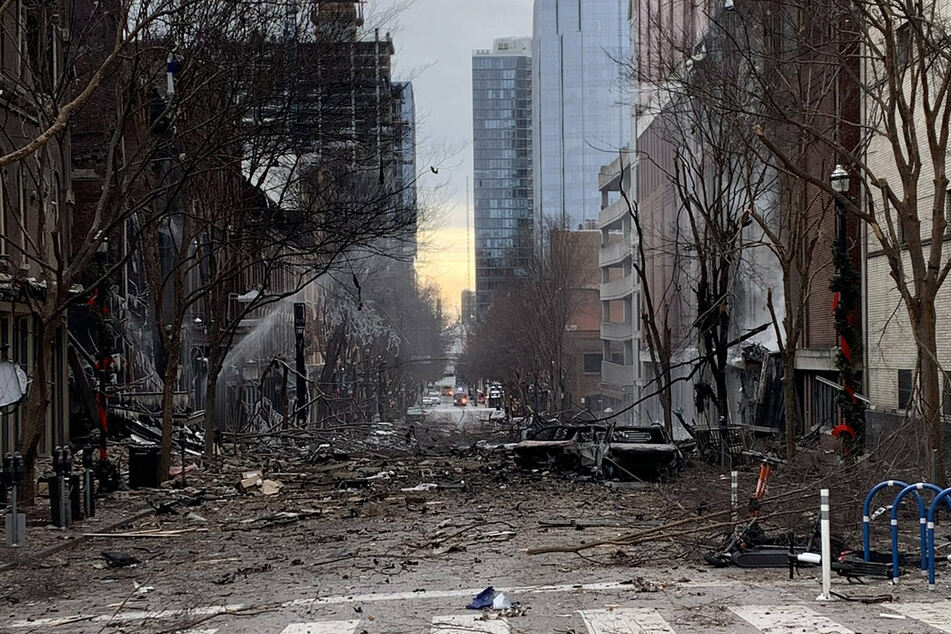 The blast on Friday seems to have been caused by an exploding vehicle, police said. Officers encountered the vehicle in the pre-dawn hours. It was playing a recording saying that it would detonate within 15 minutes.

Police managed to evacuate nearby people before the vehicle exploded, though at least one officer was injured along with two other people.

Three people were hospitalized but are in a stable condition, Nashville Mayor John Cooper said Friday afternoon at a press conference after announcing a local curfew for the area until Sunday.

Cooper called the explosion an "outrageous and cowardly attack" and said it caused "catastrophic damage" in the area, with 41 businesses at least partially damaged.

Investigations are ongoing and no motive has been identified, Nashville police chief John Drake said Friday afternoon, adding that he did not want to speculate on what the goal of the explosion was.

Drake said there were no known fatalities but "tissue" was found at the scene that could be human remains.

Officials had earlier said they could not be sure if anyone was inside the vehicle when it exploded.

The attack was intentional but a "total surprise" to police, Drake said. "We had no pre-warnings at all."

Federal agencies have stepped in to lead the investigation and have asked the public for leads.

The Federal Bureau of Investigation's (FBI) Matthew Foster said earlier the blast was a "very tragic Christmas Day event." He pledged his team was "putting everything we have into finding who is responsible for what happened here today."

Phone and internet connections were partially down in the area after the explosion damaged one of telecommunications firm AT&T's buildings.

Witnesses told local media that they felt buildings shake and saw cars on fire as a result of the initial blast.

The vehicle had been flagged by the authorities as being suspicious just prior to the blast, but it exploded before bomb squads could take action.

"This appears to have been an intentional act. Law enforcement is closing down-town streets as investigation continues," the Metro Nashville Police Department said.

The local emergency operations center later said it was being activated in response to "an intentional bombing incident in Downtown Nashville."

Photos and video from the scene showed extensive damage to nearby buildings and parked cars, stretching a number of streets from the blast point.

President Donald Trump and President-elect Joe Biden were separately informed of the explosion, their offices confirmed.