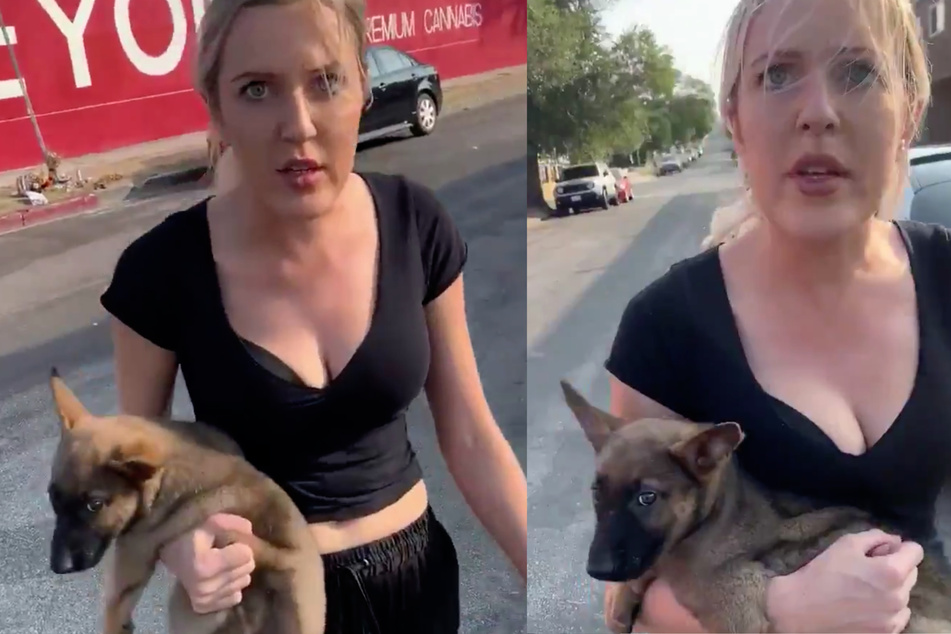 Abusive woman harasses rapper and throws puppy at him

A viral Twitter video captured an abusive woman's increasingly bizarre attacks on a Black man, culminating in a shocking act of cruelty.

Los Angeles, California - Again and again, the deeply disturbed young woman blocks his way and slurs aggressive comments. The video shot by Twitter user and rapper Glomula then escalates into a shocking finale.

Glomula tweeted the clip on Saturday and within minutes, it went viral, clocking up over 22 million clicks (!) and 146,000 likes.

Appropriately titled "Idk [I don't know] what's goin on but I got a new dog," it shows a confrontation that left viewers outraged.

In it, a blonde woman harasses Glomula for over two minutes with increasingly bizarre and at times racist comments and behavior. Throughout the whole episode, she is holding a scared-looking puppy, as she prowls around on the deserted street, stopping the man from returning to his parked car.

Her wide-eyed, unblinking stare only deepen the impression that she's on some kind of heavy drugs. Not much of what she's saying is comprehensible, but what does come through is an unmistakably racist attitude.

"You're black!", she blurts out at one point, apropos of nothing. "So what if I'm f****** black?!", replies Glomula, while trying to protect himself from the woman's flailing hand.

Her words and actions grow increasingly erratic, and she keeps advancing menacingly, all the while lugging the poor dog around like a purse. The weird comments continue. She declares that she has "no identity".

Woman throws puppy at the rapper

Glomula manages to maintain a remarkable composure and even sense of humor as deals with the absurd situation. But when he asks the woman whether the puppy is even hers, things take another turn for the worse.

In response, the woman actually catapults the little animal into the musician, using it like a weapon. The dog hits the ground hard and howls in agony, before running to Glomula for protection. Shocked by what just happened, he tries his best to comfort the terrified puppy. Whatever funny side there had been up until this moment has completely evaporated.

"You're going to jail," Glomula says. The woman then starts complaining about having her dog stolen.

Many reactions to the baffling video focused on the woman's psychotic appearance. Users homed in on her constricted pupils and irrational behavior.

Others worried about the puppy's well-being, but it turned out there was no need for concern on that subject.

Glomula soon updated everyone with an Instagram post that included a picture and a video of his new tiny friend, now called Movie. "Yes, I have da dog" he wrote.