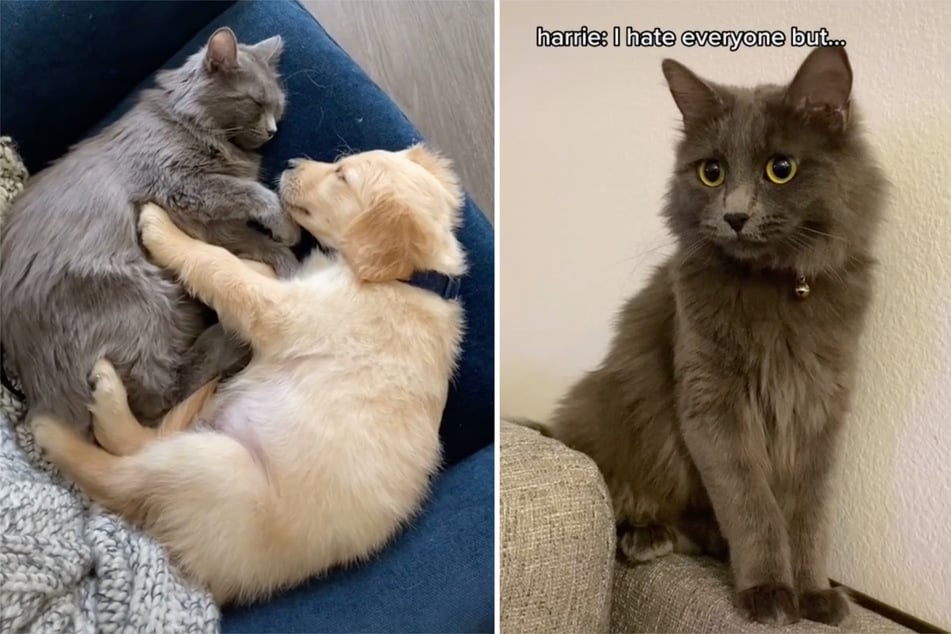 Cat "hates everyone" – then she meets this golden retriever puppy

A precious cat and dog couple has TikTok raving over the cuties .

Internet - A darling pair of furry best friends is currently enchanting millions of viewers on TikTok.

As the old saying goes, "they get along like dogs and cats". But an unlikely duo on TikTok has given the phrase a whole new meaning

Katt "Harrie" Harrington – that's the name of this gorgeous silver cat, and she apparently doesn't easily bond with other animals. However, in a recent video from owner Alyssa Lauren, you can see that the fussy feline decided to make an exception.

The clip starts with a shot of Harrie and the words "I hate everyone except..." and then goes on to introduce her one-and-only: a golden retriever puppy named Baymax.

In several scenes cut in short succession, the cute little dog and the cat cuddle together, play, and just enjoy chilling next to each other on the bed. Obviously, the two like each other very much – to the delight of many TikTok users.

After four days, the heartwarming TikTok video has already amassed more than 3.2 million views and 807,000 likes.

In a second clip, Alyssa Lauren also shows Harrie meeting another cat – and this "date" isn't quite as friendly, which makes her relationship with Baymax that much more special.

The puppy and the gray cat met in May 2020, and an older video show that Harrie had apparently long been fascinated by golden retrievers.

This is what inspired her owner to adopt Baymax. The two four-legged friends carefully got to know each other and then quickly became pals – you can follow their little love story on their owner's TikTok channel.

TikTok commenters just can't get enough: "These two are so cute together," one wrote, while another added, "this video made my day 100,000 times better."