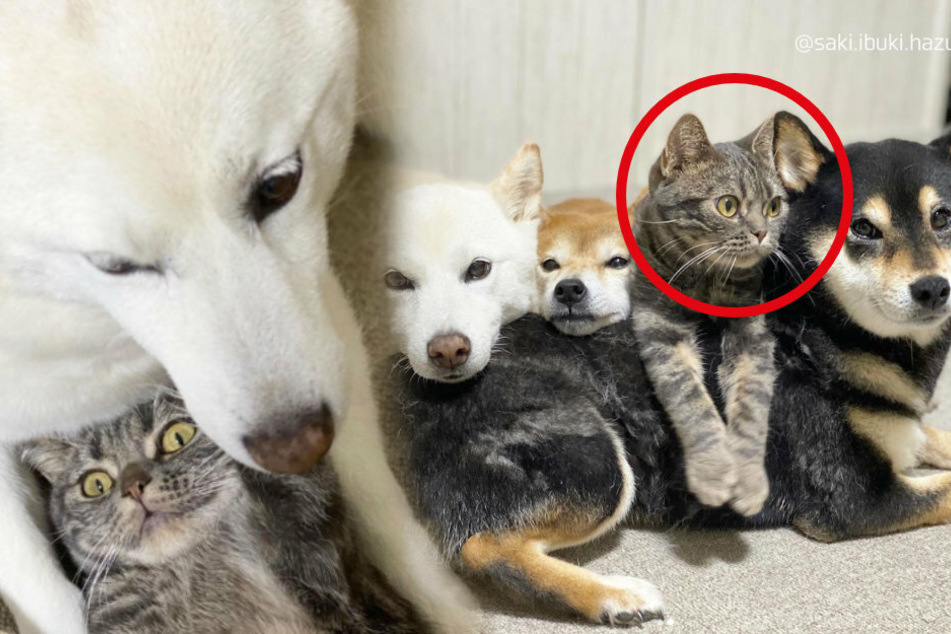 Getting along like cats and dogs: this Japanese kitty is part of the pack

Kiki the kitty proves that cats and dogs can get along just fine. His three best friends are all Shiba Inu pooches!

Japan - Kiki the kitty proves that cats and dogs can get along just fine! His best buddies are three Shiba Inu dogs who treat him like he's part of the pack.

The American shorthair Kiki and the three dogs Saki, Ibuki, and Hazuki have been posing together on their own Instagram page.

According to the Bored Panda website, the owners are a Japanese couple who had been arguing for years over whether to get a cat. Given that they already had three dogs, the husband wasn't overly excited about adding a feline friend into the mix.

"After some time, however, I was able to find a cat we both liked," the woman said.

Kiki, a gray kitten who came from a breeder in the Kanagawa region, hit it off with the dog squad right from the beginning.

In February, the owners saw for the first time just how well the fantastic four were getting along.

"I took Kiki and our dogs to a Shiba Inu party," the pets' mom said. "Kiki was getting along with all the dogs just fine, but one of them suddenly started barking at him. Immediately, one of our Shibas, Saki, barked back, protecting Kiki. At that point, I understood they've become true companions."

The team are now inseparable

In the meantime, the team has become inseparable. Kiki and the dogs do everything together, whether it's a cuddle session or an outside adventure. The cat has even adapted his sleep pattern to the dogs, and they all wake up at the same time as their owners.

The snapshots of this heart-warming friendship made waves with users on Instagram. The account already has 180,000 followers who are all eager to see more of the animal squad's adventures. Who knows, maybe it will even get a fifth member in the future.