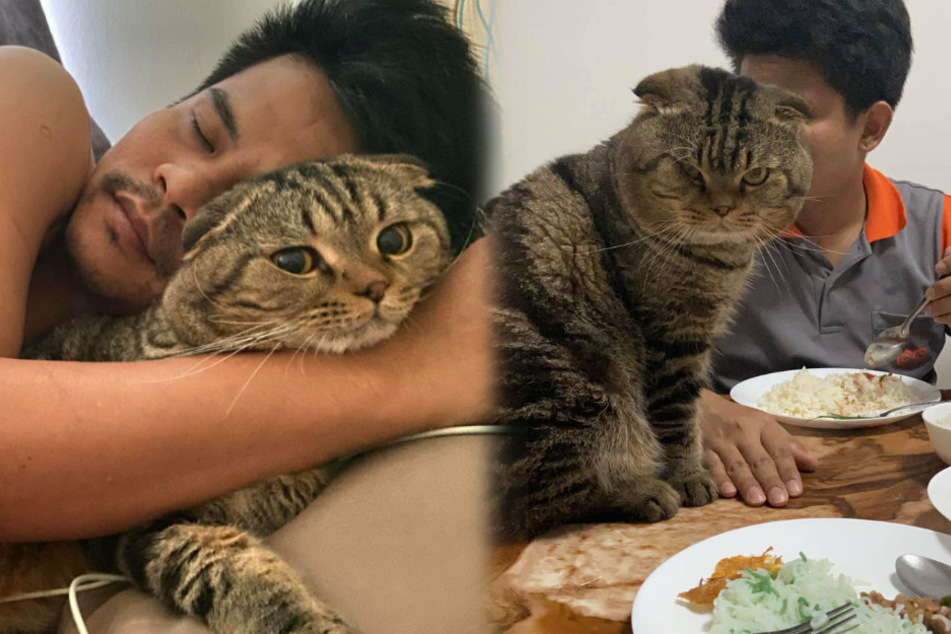 A cat has stolen this woman's husband and there are photos to prove it!

A Thai woman posted tons of pictures of her cat, Jarvis, and her husband on the net. One thing is clear: the cat won't leave his side for a second!

Thailand - Cats are famously aloof but this one is a bit different. A Thai couple went viral after Nasrin Hami posted a series of photos that show how possessive their cat is of her husband.

Jarvis, a Scottish Fold, has only one true love: the husband of Nasrin Hami. The Thai woman posted a ton of pictures of her beloved pet nestling up to her partner on Facebook.

It doesn't matter what the man – whether he's working on his laptop, eating, or just relaxing on the sofa, the cat is always with him. Not only is the cat ever-present, Jarvis clearly wants to get as up close and personal to his owner as possible.

It's all sweet until you come between Jarvis and his beloved. One look at the cat's scowl is enough to warn you off interfering!

The persistent feline loves to join in for dinner and just watch Nasrin's husband. Jarvis only seems to have eyes for him, so even the fish goes unnoticed.

The Thai woman told online magazine BoredPanda that Jarvis is six years old and has loved her husband for a long time.

"Jarvis is a good cat," she says proudly. Nasrin insists that the cat also cuddles with her, but there's really only one undisputed favorite.

The cat has quickly become an internet star.

The TikTok videos of him and Nasrin's husband have more than 800,000 views. The couple hasn't only gotten clicks, they have also had offers to buy their furred family member. Nasrin won't hear it, the cat is simply not for sale.

She's very happy with the attention her little family is getting, and she plans to keep making videos and taking pictures. Either way, Jarvis isn't going anywhere.