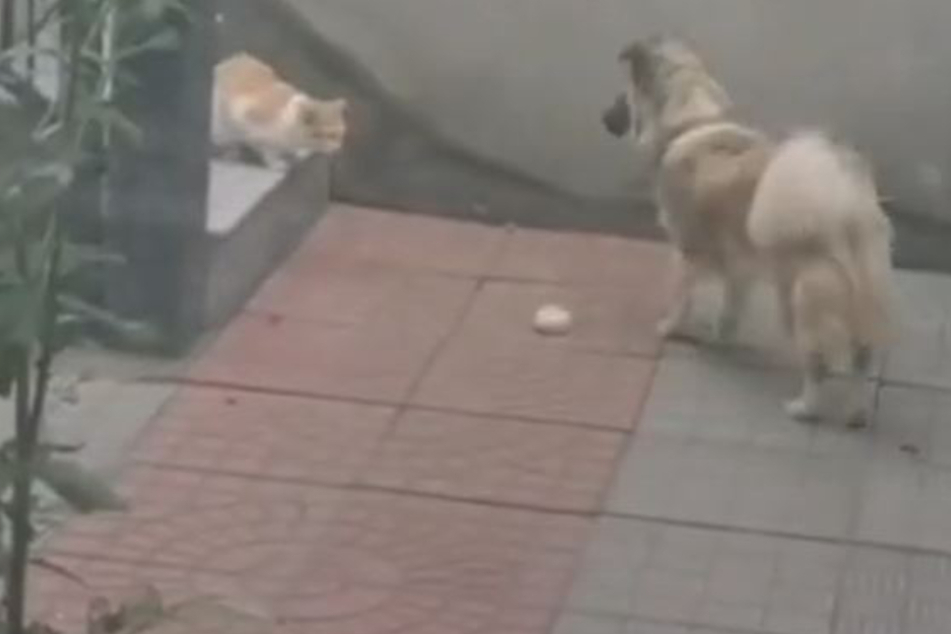 Cats and dogs don't always get along well, but when they do and it's caught on camera, it's enough to melt everyone's hearts on the internet.

Weifang, China - In a story straight out of a Disney classic, a dog asks a stray cat out for a dinner date and the resulting video is melting everyone's hearts on the internet.

A few days ago in Weifang, Mrs. Fu was keeping an eye on her dog Pudding as he approached a stray cat. The Chinese woman was pretty certain that her sneaky pet planned to lure his target into a trap. But she was very much mistaken, as the Daily Star reports.

In an interview with Shanghai-based news agency The Paper, the dog owner described the moment she caught on video.

"It happened in the courtyard outside our house on August 20. I was working downstairs that day when I heard our dog barking at the top of the steps. When I looked over, I saw it going to its kennel to fetch its meat bun, then it barked again."

Mrs. Fu then noticed a cat crouching on the stairs. "I thought he was going to use the bun as bait in order to catch or fight with the cat."

But her dog had something completely different in mind.

Mrs. Fu was astonished by what followed: "I never imagined what happened next – our dog gave the meat bun to the cat. I was very touched by the moment, because our dog is a guard dog, and usually very protective of its food."

Initially though, the flattered feline was just as suspicious as Mrs. Fu: "The cat was scared and wouldn’t come down the steps, so our dog stood back and kept its distance, allowing the cat to approach."

Excitedly wagging his tail, Pudding watched as the dinner guest finally took up his offer - not with the best manners, it must be said, as she immediately took off with the meal.

Nevertheless, Ms Fu was so thrilled by her pet's loving gesture that she just had to share it on Chinese social media.

Thousands of people watched the video, many of whom were equally touched. The story was even featured in the Chinese media.

The big question is whether Pudding's charm was enough for a possible second date.