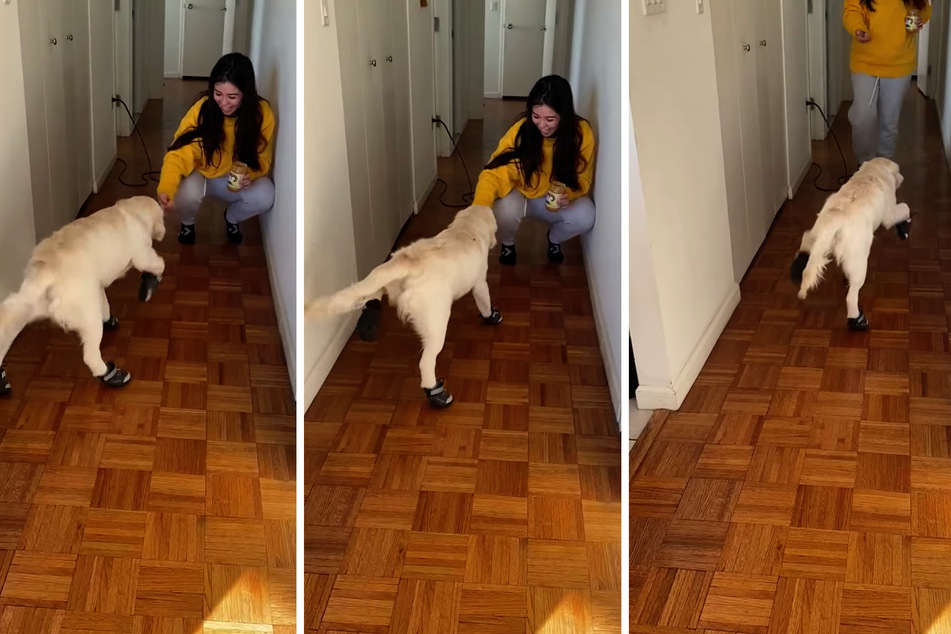 Diana Camacho got her dog a pair of shoes to keep his paws warm – but they only overwhelmed the poor pup.

New York, New York - Diana Camacho knows all too well how cold it can get on the East Coast during the winter months. In order to keep her beloved dog warm and cozy, she got him some boots.

As Diana told the newspaper Daily Star, it hadn't even started snowing in New York when she bought the new footwear for Dusk – but she wanted him to get used to them as soon as possible.

And that turned out to be a pretty good idea! It looks like Dusk could use all the help he can get.

Last Sunday, the young woman shared a quite special video of him on Facebook. In it, she just can't stop herself from laughing as the little pup takes his first steps in his new shoes.

Dusk clumsily jumps and hops his way through the hallway, lifting his paws as high as possible with every step – all while looking way too cute.

As the video goes on, little Dusk seems to become even more awkward. Over and over again he lifts his legs up and tries to figure out what on earth just happened to them.

The internet however, just cannot get enough!

The hilarious video that was shared in a Facebook group for golden retriever owners has already received over 200 likes and almost every one of the comments is a little declaration of love for the cute but clumsy Dusk.

"This is adorable!!," one user gushed. Another joined in the adoration and wrote: "[S]he did well! What a cutie pie!"

A third one however, came to the poor dog's defense: "He's trying his best ok."

And he did indeed – with some success! As Diana Camacho revealed, Dusk has improved a lot since the video was shot. Even though he is still skipping and bouncing here and then, he doesn't look as uncomfortable anymore.