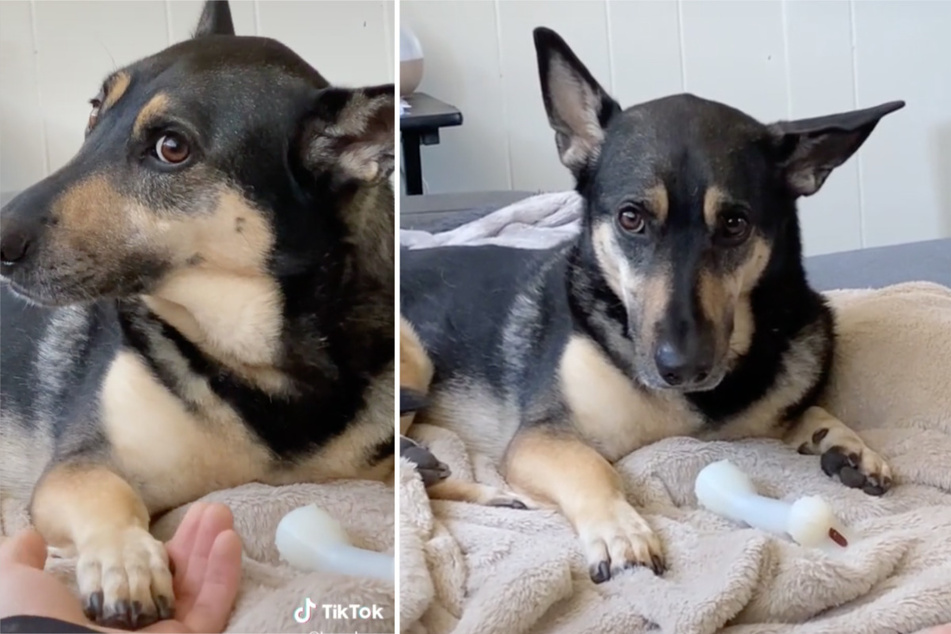 I wanna hold your paw: this dog doesn't want to let go of her owner's hand!

This dog is adorable when it's disappointed, and it's going viral because of its reaction.

San Diego, California - What's up with this cute dog? She's going viral with this cute video of her disappointment on TikTok. She's upset with her owner.

It can be extremely easy to upset dogs – and the results can be very funny or, as in this case, insanely cute and heartwarming.

In the clip uploaded to the dog's own Tik Tok channel, kona.bean, the adorable pooch is holding "hands" with her owner, Chrissy Brust.

But when the woman pulls her hand away, Kona Bean becomes visibly upset. At first, she looks confused and gazes lovingly into the camera, but then her eyes suddenly become very sad.

The animal looks at its favorite human and then seems to reproachfully ask for more, with a shy growl and then a quiet bark.

It sure looks like someone has been spoiled! In the video's description, owner Chrissy wrote that the two had been holding hands for two minutes straight. But that's clearly nowhere near enough for Kona Bean, who can't get enough of the love.

At the end of the video, Kona bean gets what she wants: her paw held. Check out the sweet TikTok video for yourself.

The clip got 3.5 million views and nearly a million likes in just five days. There are also nearly 8,000 comments.

In many of the replies, users put try to translate the dog's outraged growls and whines: "How dare you!" was one suggestion.

Others think that the dog has great communication skills: "I am concerned that this dog is able to communicate his/her needs better than I do."

One person hailed the dog's whines as the cutest things they had "seen so far in 2021."

According to Chrissy, the dog isn't a specific breed: Kona is a German shepherd-Alaskan Malamute-Corgi mix.

And if you need more proof of Kona Bean's cuteness, there is more than one adorable video on her TikTok channel.