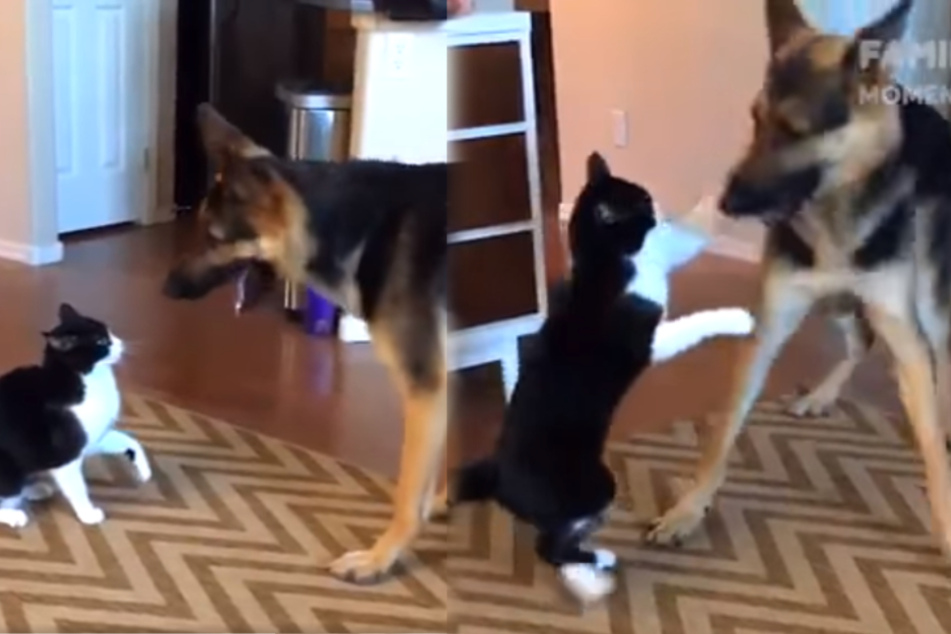 A cat and a dog are playing with each other and it's getting pretty wild. But suddenly, the German shepherd makes a surprising move.

Internet - Pet playtime with a twist : a cat and a dog are playing with each other and it's getting pretty wild. But suddenly, the German shepherd makes a surprising move.

An adorable video clip of a feisty little cat and her canine friend was posted on the Funniest Family Moments Facebook page.

The two pet pals are playing with each other, but it's getting a bit intense.

The cat is mostly on the front foot, giving the German shepherd – called Scout – a few well-aimed slaps with her paw. But the dog doesn't seem to mind and skillfully dodges the attacks.

But suddenly, the big pooch tries out a different strategy: he crouches down. The two are now at the same level and this clearly has an impact on the dynamic. The cat hesitates for a second and then also settles down in front of its playmate.

There's still some hesitancy as the cautious kitty keeps her mitts up – just in cases. But then comes the sudden display of affection, as the cat gives Scout's nose a few heart-melting licks.

The peace only lasts for a brief moment though. The dog gets up to playfully circle the feline again and game's intensity moves up a notch as. So much so that the owner has to intervene by telling Scout to take it easy.

Although the roughhousing pets ignore their owners warnings, it never seems to get too serious and the smart cat eventually finds cover, without ever giving up on taking swipes at Scout's muzzle.

The clip went viral, with almost 25,000 likes and hundreds of delighted comments.

Aside from being incredibly cute, this interaction between the two animals shows just how intelligent and empathetic they can be, recognizing each other's needs and intentions at all times.