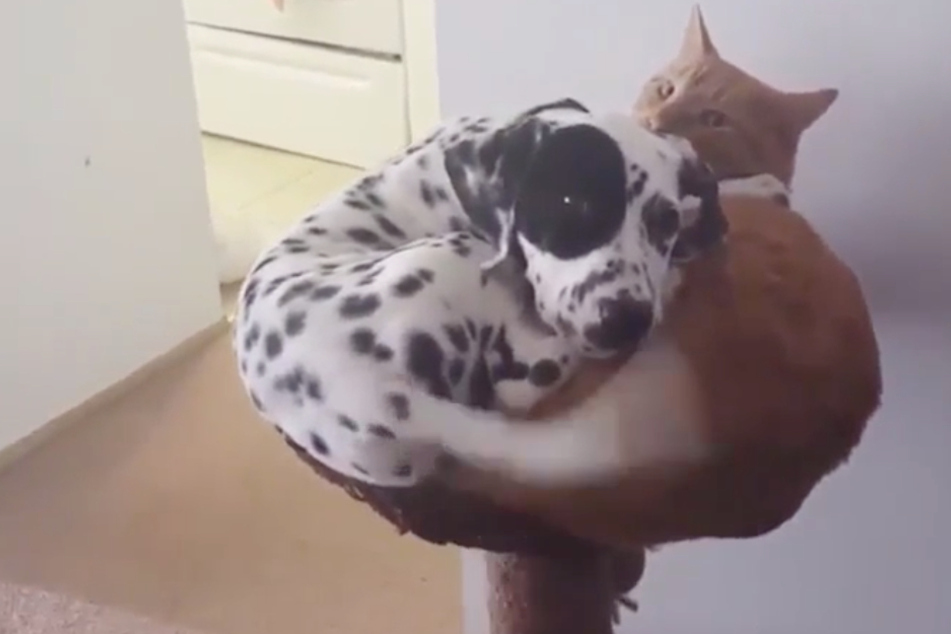 These pets make strange bedfellows – and Reddit loves it!

Cats and dogs don't usually get along, much less cuddle, so what's going on in this clip?

Internet - What is that dog doing up there?! Are these two animals best buds?

The relationship between cats and dogs is often strained. Sometimes the two animals tolerate one another and may even appear friendly. Other times, the tension is palpable.

A video posted by Reddit user sherlock_er proves that cats and dogs can come to an understanding, at least temporarily. The cute clip, which is just 12 seconds long, shows a big orange cat lying on its scratching post.

But the feline isn't the only one on the perch: a Dalmatian puppy is snuggling with the cat! The two are nestled together on an elevated space barely big enough to hold them.

The dog seems content, wagging its tail while looking into the camera. At first, the cat seems to accept the cuddling canine.

Are these animals best buds?

When the puppy turns its head and sniffs the cat's neck, the feline turns away. It might have been okay with sharing its space, but it doesn't look like it likes being nuzzled.

Unless the cat wants to give up its spot, it's going to have to tolerate the dog. To make matters worse, the dog is basically lying on top of the cat.

Reddit users love the clip, which is titled "Just the bestest of friends for life."

But not all users are sure these two are best buds. One user wrote some dialogue for the animals in the comments: "Dog: You’re my VERY BEST friend. Cat: I’d rather you leave me alone and get off my perch."

Another agreed that the cat doesn't seem happy: "Cat's face is like...Mama, please save me!!"

One user is less interested in the cat and dog's relationship dynamic and has a different question: "I want to know how the dog climbed up there. That pup has great balance."

Regardless how the pup made it to the top of the post, once it gets bigger, it's going to have to find a different spot to cuddle with the cat. They aren't both going to fit on that small perch forever!