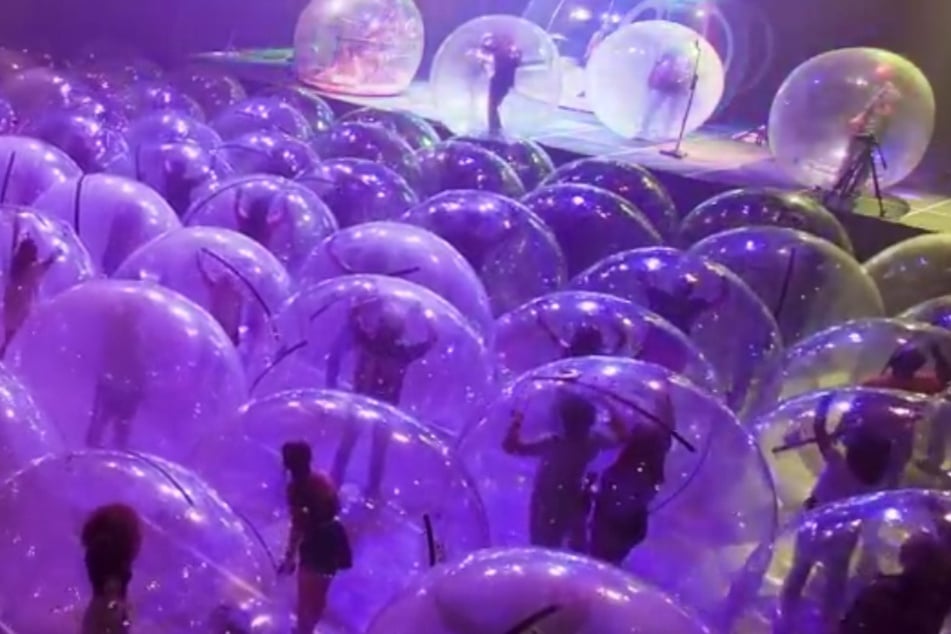 The Flaming Lips found a way to play a concert during a pandemic: the band and audience were in "Space Bubbles".

Oklahoma City, Oklahoma - Is this the new normal? In times when holding a concert seems like a pipe dream, rock band The Flaming Lips found a way to do it: space bubbles.

In their hometown of Oklahoma City, the musicians played a show at The Criterion theater on 22 January.

They had an ingenious idea for making their concert safe during the coronavirus pandemic: the band and every single concert-goer were enclosed in so-called "space bubbles.".

As CBS New reported, frontman Wayne Coyne (60) was inspired by the inflatable bubble he used to stage dive into the audience during shows.

Coyne drew a cartoon of himself and his band followers: all protected by bubbles at a concert back in spring when the coronavirus pandemic first began. Now this doodle has become reality.

You can dance in the bubble but no peeing allowed

According to the BBC, at the beginning of the concert, Coyne said that being in the bubble is "safer than going to the grocery store."

Each bubble, which can hold up to three people, has enough air for an hour and ten minutes. At the concert each bubble was equipped with a towel, a fan, and a bottle of water. The bubbles also had a high-quality supplemental speaker to ensure good sound.

If a guest needed to use the restroom all they needed to do was hold up a sign to alert venue staff of what they needed "I need to pee/ it's hot in here." They would then be left out of a bubble and escorted them to the restroom, after putting on a mask. If it got too warm in the bubble cold air could be pumped into the bubble with a leaf blower.

The Flaming Lips tested their bubble concert idea for the first time in June on Stephen Colbert's A Late Show, and then held a small bubble concert in October. Their trial runs were successful and the band decided to play for a larger audience.

The only drawback of the bubble concerts is that they need a lot of space.

The album features epic melodies and Coyne's touching falsetto vocals and is reminiscent of rockers like Pink Floyd or Yes. Lyrically the album is full of references to drug-induced visions (Mother I've Taken LSD) but also peppered with childish fantasy (Dinosaurs On The Mountain).

All in all, a coherent, exciting record from the first to the last minute.