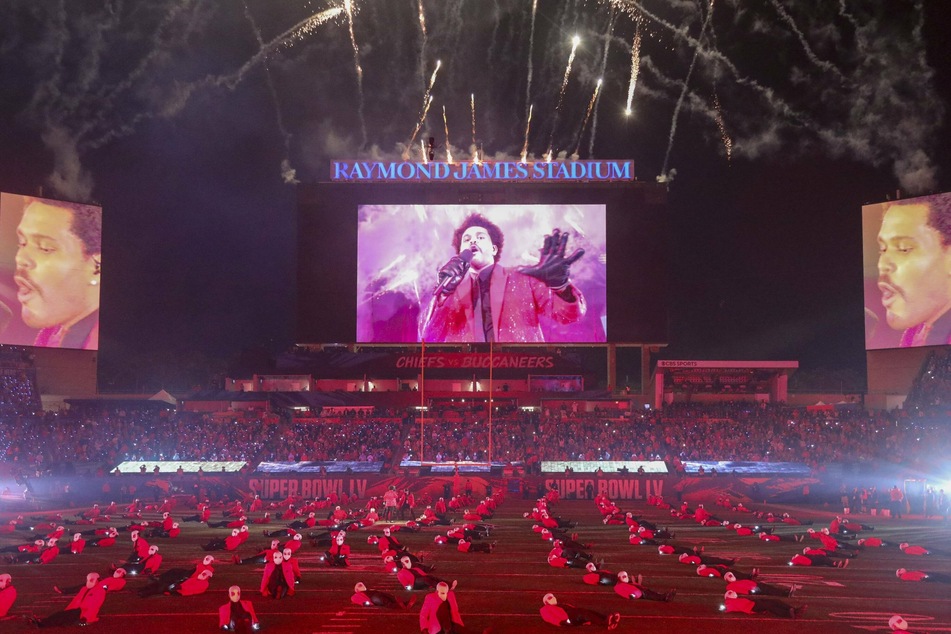 Amid the pandemic, the Weeknd’s halftime show at Super Bowl LV was never going to feel like business as usual for pop music’s most-watched annual performance.

Tampa, Florida - Because of the Covid-19 pandemic, there was never a chance that the Weeknd’s halftime show at Super Bowl LV would feel like business as usual for pop music’s most-watched annual performance.

But even by the strange standards of our socially distant age, Sunday night’s showing by this Canadian pop-soul auteur was a proud outlier.

Instead of doing his thing in the middle of the football field, as halftime acts have done for decades, the Weeknd spent most of his 14-minute performance in the stands beneath a giant video screen at Tampa’s Raymond James Stadium.

In place of smiling dancers working their athletic bodies, he was surrounded at various points by red-eyed people impersonating robots and by guys wearing head bandages as though they’d just survived a brutal car crash (or perhaps a round of cosmetic surgery).

And instead of punctuating his set with some old rock classic meant to push NFL fans’ nostalgia buttons, the Weeknd threw in a bit of Happy House by Siouxsie and the Banshees – almost certainly the first early-1980s goth flashback in Super Bowl history.

An entertaining set with a signature strangeness

Spooky yet darkly funny, this appealingly bizarre spectacle reflected the Covid era in both mood and logistics. The songs sported bleary textures and words about feeling alienated from one’s body; there was zombie-like dancing by those bandaged dudes that surely triggered viewers’ unease about the danger posed right now by a crowd.

And a considerable stretch of the show took place in a small interior space – a gold light-filled chamber beneath the stadium’s bleachers – not unlike the ones many of us have been living in for close to a year.

But this is also who the Weeknd is: a 30-year-old singer with an angelic voice who writes about all the ways in which love (or drugs) can kill a person – or sometimes bring a person back to life.

His set was a fast-moving medley of some of the irresistible hits that despite their crushing pessimism, have made him one of pop's biggest stars over the last half-decade: Starboy, during which those robots jerked their arms with uncanny precision; The Hills, about a life gone to ruin thanks to celebrity excess; Can’t Feel My Face, which compares the charge of a new infatuation with the thrill to be had by snorting a line of cocaine; and Earned It, an orchestral ballad that he sang as though he were the headliner at some dystopian Las Vegas supper club.

And because he stuck so closely to his signature vibe, he seemed incredibly at ease as he performed for the tens of millions of people watching at home.

He grinned; he winked; he took opportunities to look deep into the camera – lots more closeups than usual in this show – as he sang in I Feel It Coming, a gorgeously futuristic electro-soul ballad, about a woman who’s been "scared of love and what it did to you."

Have no fear, he seemed to be saying – you’ve been through the worst.

The show ended, as anyone knew it must, with Blinding Lights, the Weeknd’s unavoidable '80s pop smash that's stayed near the top of Billboard’s Hot 100 for more than a year now. (Minus Blinding Lights, there’s virtually no chance the Weeknd would’ve ever ended up on the Super Bowl short list.)

For that one, he descended to the field, sashaying through the Kansas City Chiefs’ end zone, to cavort among his head-wound accomplices as fireworks shot off into the sky over the stadium.

But this is also where he did those few bars of Happy House – a reminder that weird times call for weird superstars.