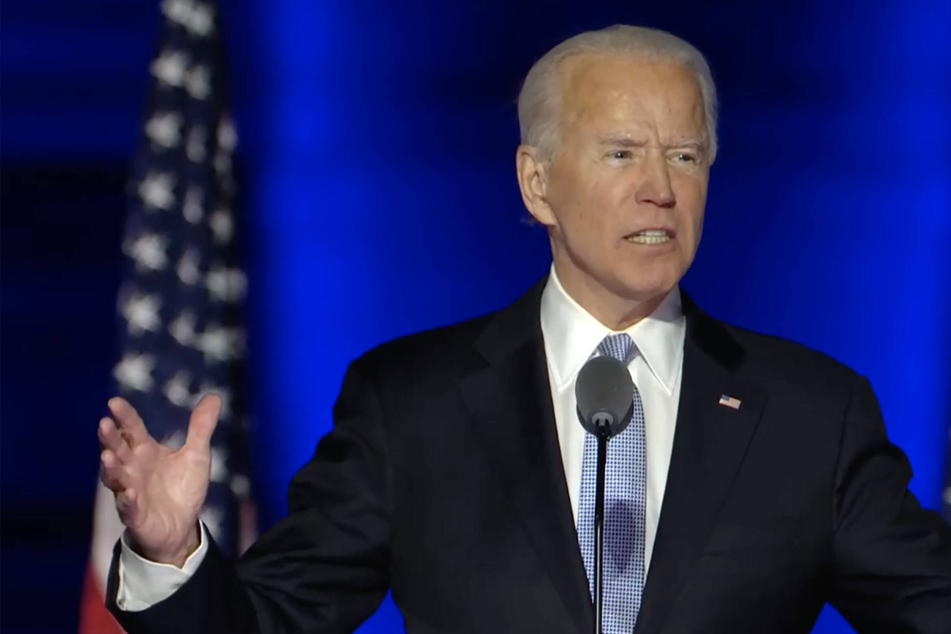 "We are not enemies. We are Americans": Biden strikes conciliatory tone in victory speech
Nov 8, 2020 11:41 AM

"We are not enemies. We are Americans": Biden strikes conciliatory tone in victory speech

Coming off a divisive presidential campaign, President-elect Joe Biden has said he will govern for all Americans

Washington D.C. - Democratic candidate Joe Biden is the projected winner of the US presidential election, defeating incumbent Donald Trump who is showing no signs of willingness to concede.

Biden was declared the winner on Saturday by major US media outlets tracking vote tallies, after more than four days of ballot counting. Razor-thin margins in key swing-states kept voters on edge as they patiently awaited an outcome since Tuesday.

The Democrat has said he will govern for all Americans despite coming off a divisive presidential campaign that highlighted the country's fraught state of race relations, economic conditions and Trump's handling of the coronavirus pandemic, which has killed over 230,000 people in the US.

Trump has continued to declare himself the winner and made repeated unfounded allegations of significant voting irregularities, some of which have already been rejected by courts and election officials.

The Republican president vowed to keep up legal battles and launch news ones on Monday. It remains to be seen if any of his efforts will succeed, but it is doubtful he will be able to overturn a growing consensus around the election result.

Turnout has smashed records, in terms of raw numbers, a sign of the strong interest in this election among both Republicans and Democrats. As a percentage of the electorate, more people voted this year than in any year since 1900.

"I sought this office to restore the soul of America, to rebuild the backbone of this nation, the middle class, and to make America respected around the world again," Biden said in a Saturday night victory speech, his first remarks as president-elect. "Now the work of making that vision is real."

Biden said handling the coronavirus is his first order of business and he plans to appoint a team of scientific advisers on Monday that will oversee his pandemic plans.

"Let us be the nation that we know we can be," Biden added. "A nation united, a nation strengthened, a nation healed."

Biden will have challenges from day one, not least the coronavirus pandemic and a damaged economy. He will also have to deal with calls for criminal justice reform and promises to build a greener economy and ensure health care for Americans.

Trump does not have to concede for the Biden transition to move ahead, but it could make life harder for the incoming president, with national unity likely to suffer.

Biden was declared the winner by all three major US broadcast networks, the cable news channels, including conservative Fox News, and the authoritative Associated Press news agency.

The move came after it was clear he won Pennsylvania and Nevada, pushing him well past the 270 electoral votes needed to seize the White House.

The 77-year-old Biden, running his third Democratic presidential campaign, pitched himself as a president who will return the country to a state of stability and civility that seems long forgotten after four years of Trump's pugilistic governance by tweet.

Trump spent the morning at his golf club in Virginia and was there when it was announced that he lost. He has since returned to the White House and is not expected to appear in public again on Saturday, though he has continued to angrily post to Twitter.

The Democrats' hope for a crushing Biden victory to repudiate four years of Trump rule and invective did not materialize.

Biden is set to become the 46th president on January 20 with a near-split in the Senate and a weakened Democratic majority in the House of Representatives. Unless he can chart a path of compromise, partisan gridlock may dominate his presidency.

"While I may be the first woman in this office, I will not be the last, because every little girl watching tonight sees that this is a country of possibilities," Harris said during her victory speech, adding that Biden "represents the best in us."

Trump is now the first US president to lose reelection since George H W Bush in 1992, a Republican who failed to secure a second term in the White House in the race against Democratic Bill Clinton.

The election is "far from over," Trump said in a statement through his campaign. "Obviously he is not going to concede," said Rudy Giuliani, a top Trump ally.

Top elected Republicans have largely refrained from offering the traditional congratulatory message to the declared winner. However, some senior party members have broken ranks, including Mitt Romney, a senator and the Republican 2012 presidential nominee.

Some Trump allies in Congress have backed the president, saying vote counting must continue and unfounded allegations of fraud should be sorted out in court.

But in a possible sign that key allies are shifting away from Trump, the New York Post, a flagship conservative newspaper, has declared that Joe Biden is the US president-elect with a front-page article stating, "It's Joe Time."

Now each state has to finalize their results by December 8, before a December 14 deadline to assign the 538 electoral college votes.

The Electoral College vote and the ultimate declaration of the winner by Congress on January 6 are usually symbolic events, but since Trump's has declined to concede, they may take on importance.

Trump will remain in the presidency until January 20 when Biden is inaugurated – and it remains unclear how Trump will approach his final 10 weeks in office.

Even as Trump refused to admit his loss, major world leaders spanning Germany, France, Britain and India, among others, have recognized Biden as the president-elect and offered their congratulations.