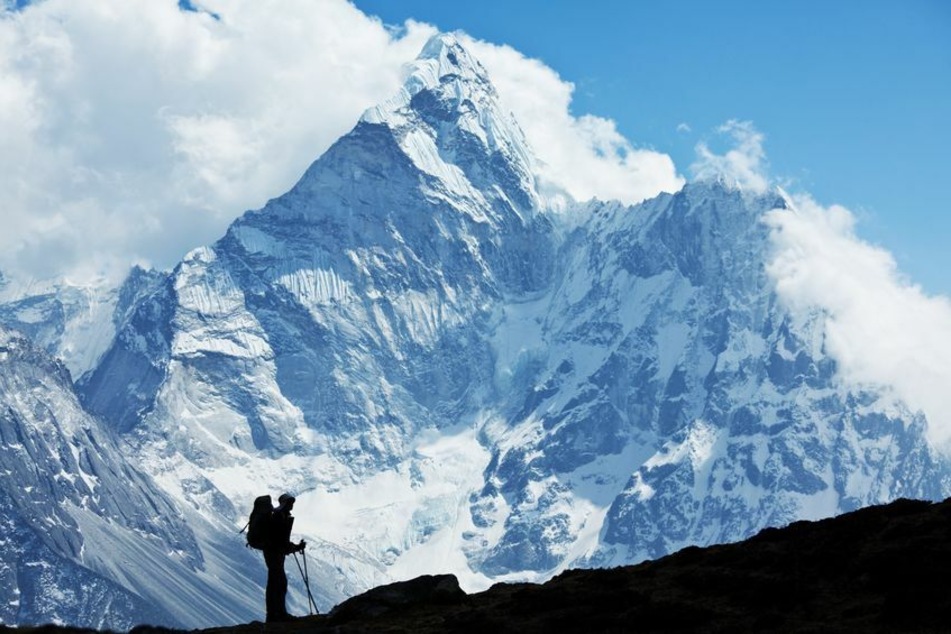 Measuring Mount Everest: one man's long and painful journey to the top of the highest peak

Kathmandu, Nepal - Most adventurers try to leave the death zone at the top of Mount Everest quickly, but Khim Lal Gautam spent two hours up there. He was part of a team collecting data to figure out exactly how tall the mountain is.

Usually, Khim Lal Gautam works at a desk. He is a land surveyor for Nepal's government.

But as the DPA reported, he jumped at the chance to do some field work when his employer asked him to take on a dangerous but exciting task. He was asked to climb Mount Everest and measure its height.

His pregnant wife tried to dissuade him from going. In an interview, Gautam said that if he had a chance to do things over, he would refuse to go.

Back in the spring of 2019, Gautam was eager to set off. He was the best man for the job because the now 36-year-old was the only Nepalese civil servant who had climbed the mountain before, five years earlier.

"I couldn't resist, because I was driven by a sense of obligation to do something for the country," Gautam said.

The exact height of Mount Everest was doubtful

Although Nepal recognizes the 29,029 feet measured by Indian researchers in the 1950s as Mount Everest's official height, this number has been disputed in the international community.

For Nepal, the expedition was a matter of national pride. The country had never tried to measure the mountain itself.

Experts think that the height may have changed over the decades due to gradual tectonic shifts, as the Indian Plate presses the Eurasian Plate. The 2015 Nepalese earthquake was also sure to have had an impact. Additionally, the snow covering Everest's peak is also receding due to climate change. Dust from some of the world's largest deserts is contributing to the rapid melting of the Himalayan snow caps, a recent study found.

Nepal initially planned to go it alone in measuring Everest, but when Chinese President Xi Jinping visited in 2019, the two countries agreed to announce the height based on their joint findings.

Gautam fainted on the descent

Gautam and his team of four reached the top in 2019 and immediately faced a traffic jam of climbers in the so-called death zone, where the human body breaks down and does not recover.

After arriving at the highest point at 3 AM, the Nepalese climbers fixed radar and navigation devices, changed batteries, and gathered data to measure the height of the world's tallest mountain. This was all done in an atmosphere low on oxygen and temperatures dropping to minus 45 degrees Fahrenheit.

But as an experienced surveyor, Gautam was able to concentrate. He remembered some 100 climbers coming and going, taking selfies and putting up their countries' flags, as he and his colleagues worked tirelessly.

Gautam's team measured Everest's rock height and snow height using the Global Navigation Satellite System (GNSS) and a ground penetrating radar, as well as scanners, control monitors, and antennae that they had carried up with them.

About two hours after they started setting up the equipment, when the sun rose, they began their descent. Gautam said that he fainted soon after. When he woke up, he was alone and his left foot was in such pain that he could no longer walk.

Mount Everest is strewn with the remains of adventurers who didn't make it. Most of the dead stay where they fall because recovery is expensive and difficult. But Gautam was determined not to join their ranks and he made it safely down after being rescued by heliecopter.

Gautam spent just under a month and a half on Mount Everest. When he returned home, he learned that his wife had lost their first child. "Many in my family still think that this wouldn't have happened if I had stayed home," he said ruefully.

He also lost a toe after months of unsuccessful and costly hospital treatment for frostbite.

But Gautam did not stop. The satellite measurements that his team was also working with did not directly record the height above sea level. The height had to be calculated with the help of a computer model and further measurements from the vicinity of Everest.

Once the Nepalese researchers compare their data with that from a Chinese expedition from May 2020 – the only climb to the summit of the year, due to the coronavirus pandemic – the results will be published. The numbers collected by these two missions will probably bring us closer to knowing the exact height of Mount Everest.

Gautam is proud of his work and looking forward to the seeing the fruits of his hard labor.