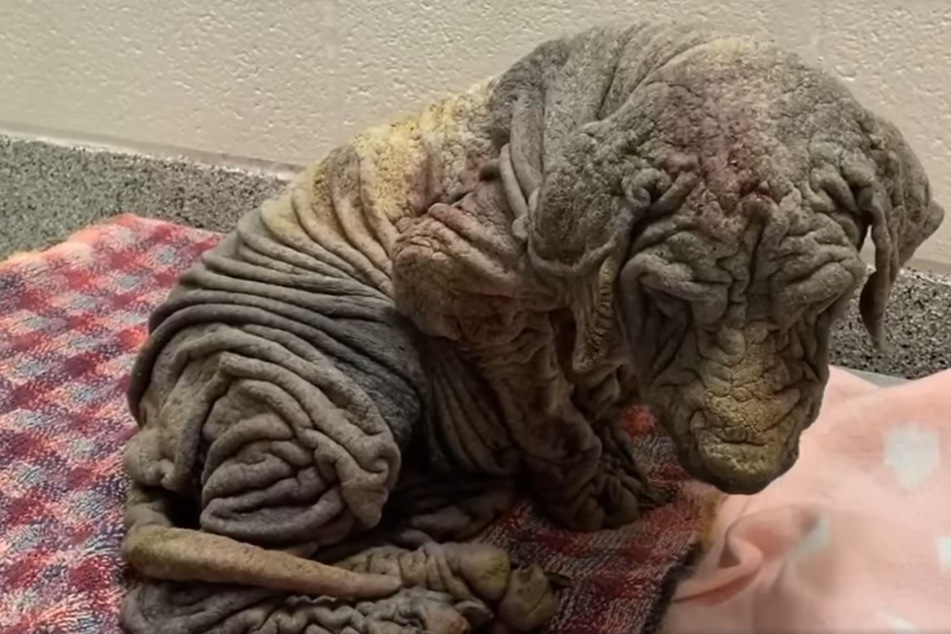 Broken dog suffers alone for years until someone finally steps in to help
Oct 5, 2020  8:30 AM

This sick and scarred dog wandered the streets of Houston in pain. But after a lifetime of suffering, she finally has a shot at something better.

Houston, Texas - Deep wrinkles, floppy skin folds, and eyes that seem to express all the pain in the world: this poor dog was left to wander the streets of Houston, alone with her terrible sickness.

It must have felt like an eternity for the stray, abandoned and ignored. But even as her appearance reached a terrible point, someone finally stepped to lend a helping paw.

ThisIsHouston is an organization that wants to give helpless animals another shot at a good life. The activists documented Madelyn's case on their Facebook page.

They rescued the scarred dog from her exile on the streets and took her straight to the emergency room.

In a post, ThisIsHouston expressed horror at the state Madelyn was in: "Her spirit is broken. Her fur is gone. Her entire body hurts. Her mind is wondering what she did wrong. Her heart is torn. This is what happens when a living animal is ignored for so long,"

"This baby knew nothing but pain and misery for her entire life. She’s 5 years old and has been completely failed by humans. Can you imagine how many people saw her over those 5 years and ignored her? Our hearts break thinking about how her life has been up until this point."

Madelyn now has someone in her corner

Mange, heartworms, an enlarged heart and years of trauma – it seems almost miraculous that Madelyn made it this far. Her saviors want to take over from here and plan to fight for her all the way.

And things are looking up already. After being discharged from emergency care, Madelyn's condition has steadily improved, and she is growing closer to her new friends.

"She has a long road to recovery, but she’ll get there," ThisIsHouston wrote, "We’re honored to be taking this journey with her!"

And the news just kept coming – on Saturday, the activists found what they believe to be Madelyn's puppy. The little pooch was given the name Marilyn and has the same devastating diseases.

Both Madelyn and Marilyn are now getting the love and attention they never had, but always deserved.