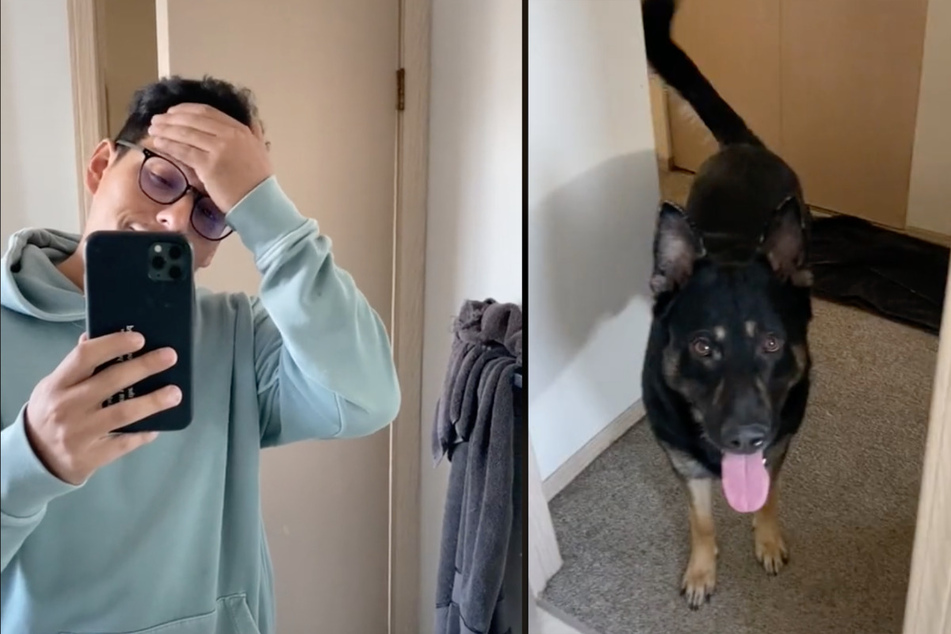 Kicking down the door: clingy dog won't give his owner a moment's peace

This dog shows his love with a big bang! A TikTok video of a clingy dog showing how much he loves his owner is thrilling millions of viewers.

Lakewood, Colorado - This dog shows his love with a big bang! A TikTok video of a clingy dog showing how much he loves his owner is thrilling millions of viewers.

There are tons of crazy trends on TikTok, like the funny dance performances or deadly challenges. But few are a sweet as the one that has users attempting to prove how "clingy" their pets can be.

Jorge, who goes by the username Deadeyeskuma on TikTok, accepted this challenge.

In his clip, the young man from the Colorado goes into his bathroom and closes the door behind him. But just two seconds later, the bathroom door is pushed open so hard it slams against the wall with a loud bang!

Who's behind the door? Why, it's Jorge's German shepherd, Kuma. Jorge turns the camera to reveal the dog happily panting and wagging his tail in the hallway behind his owner.

The animal obviously couldn't stand being alone for a single second and the not even the bathroom is off limits. Kuma wanted to be part of the action and is apparently ready to kick his way in.

The hilarious video already has 25 million views and more than 5.2 million likes ,and it's only been up for three days. Take a look at the fun for yourself!

The comments show that TikTok users think Kuma's in charge of the household. "Sir I think he's the owner and you are the pet."

Another tried to guess the dog's thinking: "Didn't I tell you NOT TO CLOSE MY DOORS."

"He's just making sure you're not texting other dogs," a third user joked.

Meanwhile, Jorge posted another video of Kuma once again busting open the door, proving that this is definitely a regular feature of life with this extremely loving pooch.