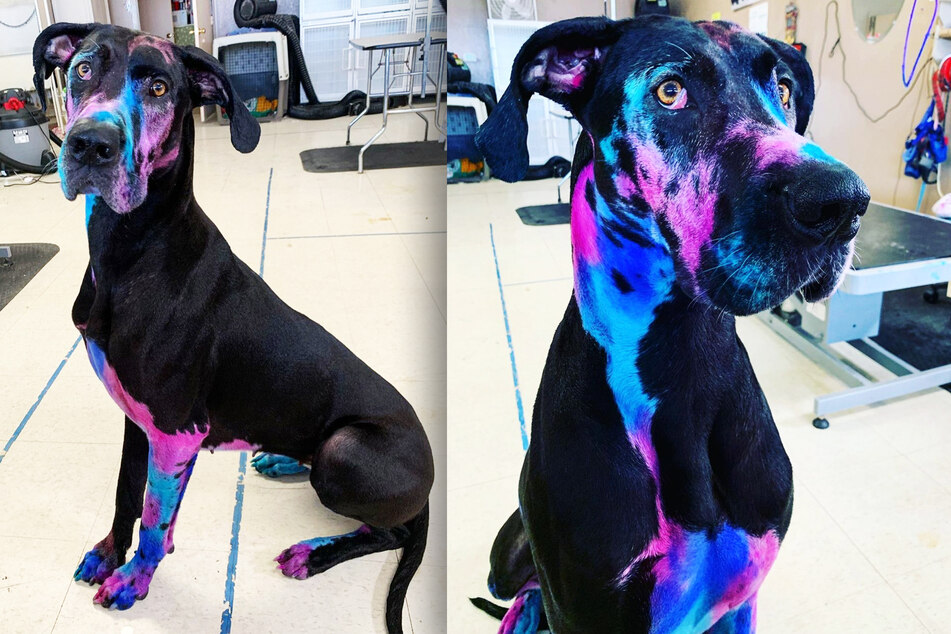 What happened to this dog? "Galaxy Dane" confuses everyone!

Attention all animal lovers! It appears that a new breed of dog has been discovered in Colorado! At least that's what it looks like at first.

Grand Junction, Colorado - Attention, animal lovers! It appears that a new breed of dog has been discovered in Colorado!

At least that's what it looks like at first. However, this is actually a just a very strangely colored Great Dane.

Instead of the typical brown or black fur, this one looks like a four-legged psychedelic trip!

Pictures on Instagram show the dog called Echo showing off his fashionable jet-black coat covered in turquoise and pink spots.

But what exactly happened to this groovy mutt? Does he have some type of disorder? Or is this a case for the animal welfare activists?

His owner, Sierra Nadine Schoon, is a dog stylist, who, according to the Daily Mail, uses pet-safe dye to color the white parts of Echo's fur.

Echo loves the attention he's been getting and apparently went from being incredibly shy to quite the peacock!

Whenever people ask, Sierra Nadine Schoon likes to tell them that Echo is a special breed called "Galaxy Dane".

"You kind of stand there for a minute, look at their reaction and let them stew and then finally tell them, 'No, she's dyed that way'," the stylist laughed.

She would have never thought that anybody would actually believe her that "a dog would naturally be pink or blue – let alone pink, blue, purple and turquoise."

According to Schoon, the dyeing process takes around three to four hours. And Echo? He seems to enjoy it, as he remains calm throughout the entire procedure.