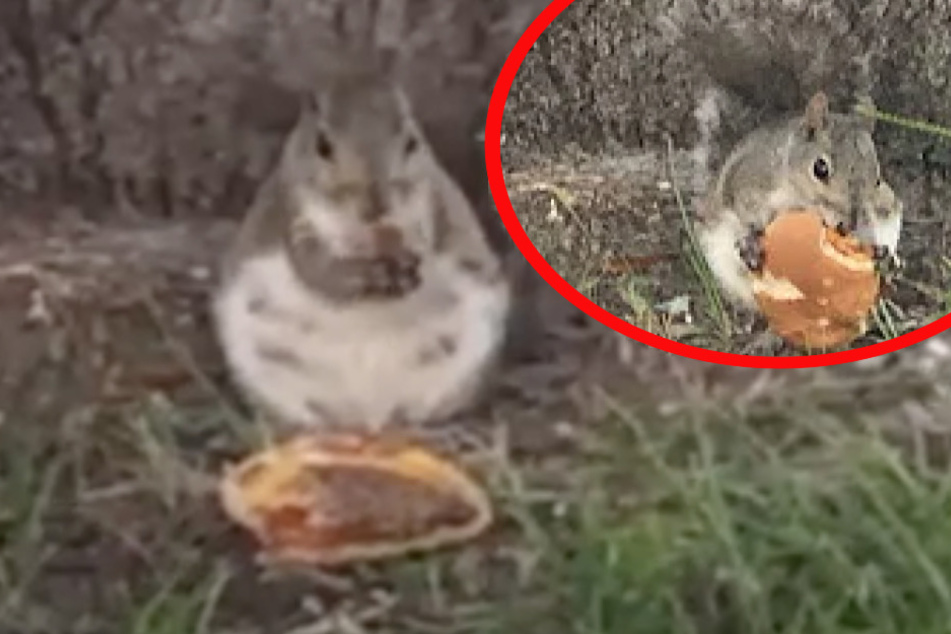 A plump squirrel chowed down on a meal that was the same size as itself.

Venice, Florida - This chubby squirrel is becoming an internet hit! The reason for the rotund rodent's new-found fame is its dinner choice: a whole McDonad's cheeseburger.

Jamie Walton from Venice, Florida, was in the right place at the right time. The 36-year-old filmed the pudgy squirrel munching on a huge lunch.

Usually the chipper rodents grab food from the ground and then scamper back into the trees, which makes it hard to catch them with their cheeks full.

But this one didn't make it too hard for Jamie. The chunky animal was completely relaxed. It had gotten its paws on a tasty cheeseburger and was content to munch away and ignore Jamie's presence. The cheeseburger was as big and as round as the squirrel.

"I pulled into a parking space and it [the squirrel] was a few feet from my door," Jamie later told the British newspaper Metro. "I thought it was funny and people have found it amusing,"

They sure have, and the big guy is becoming a social media star. His YouTube video has over 1,000 views so far.

Squirrels eat just about anything

Many people think that squirrels only eat acorns and nuts or cones, but they are actually omnivores. Their diet varies depending on where they are and what is in season.

Jamie emphasized that squirrels will "eat anything." In fact, if food is scarce, squirrels will steal and eat eggs right out of a birds nest. They have also been seen snacking on small birds, snakes, and even other rodents.

So the chubby tree rat that went viral probably just has a McDonald's in its neighborhood.

Users commented on the squirrels shape. Some even wondered if the squirrel was pregnant and not simply fat. Jamie replied, "It is not typical for them to give birth at this time of year, but I am not an expert."

Pregnancy wouldn't be out of the question. The critters mate twice a year, once at the end of January and at the end of August. Generally, about five young are born after four weeks of gestation.

So it's possible that this huge cheeseburger was a meal for 6 and not just one very round rodent.