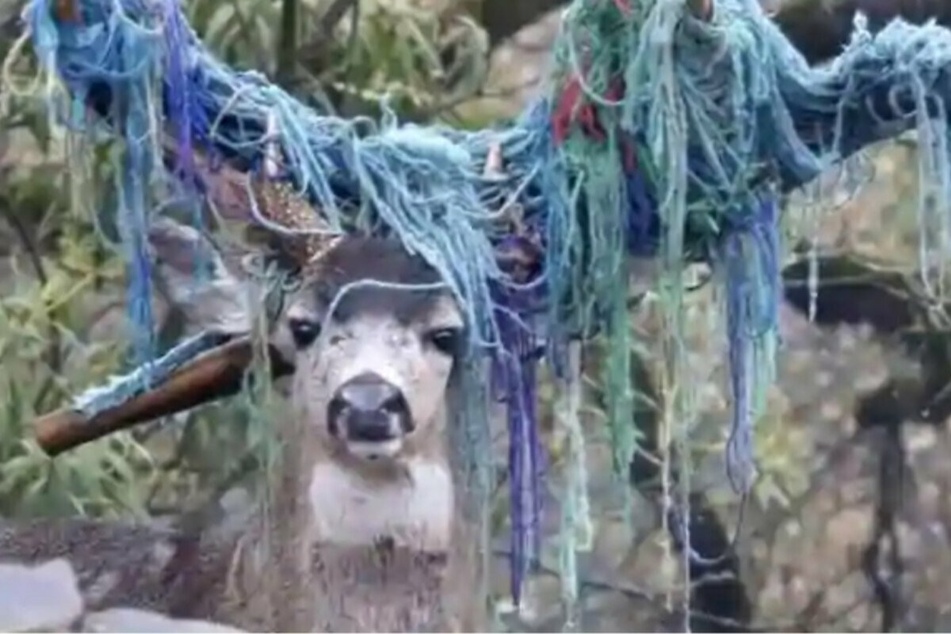 This poor deer had his antlers in a knot – what could be the cause?

The picture of the deer tells a sad story.

Fair Oaks, California - A deer walking around with blue fabric stuck to its antlers for nearly six months became a sensation of sorts in the Fair Oaks neighborhood, but the picture hides a sad story.

The California Department of Fish and Wildlife shared the story behind the picture on Facebook.

The buck first became entangled in the hammock near Lake Natoma, California, in summer 2020, when the animal reportedly collided with a group of people having a picnic.

When they saw the deer, they lured the animal with food.

But their plan backfired: as the deer approached the people, a hammock got tangled around his antlers.

"This handsome buck was lured too close to a hammock and other life-threatening human hazards by Fair Oaks residents who were feeding it illegally," the rescuers wrote on Facebook, alongside a picture of the poor deer with a brightly-colored hammock stuck to its antlers.

"We would like to remind everyone who wants to help protect wildlife to please not feed wild animals. Not only is it illegal to feed deer but they do not need human handouts," the rangers warned in one of their posts.

"Feeding them ultimately puts their lives at risk in ways many do not realize."

The rangers tried to remove the hammock several times, but the buck eluded rescuers for almost six months.

Finally, after closely tracking the deer, rescuers "showed up in the dark and basically ambushed the deer," Captain Patrick Foy told a local NBC affiliate.

In "full camouflage," they waited for over an hour.

"This animal had no idea we were there. My partner got a good dart in the right spot which is generally the major muscle groups," Foy said.

After having tranquilized the animal with a "specially mixed drug," the officers removed the hammock and sawed off the buck's antlers to prevent future damage.

Many users commented under the rescuers' post, thanking them for their tireless efforts to save the animal.

Neighbors, who watched out for the deer since its unfortunate entanglement, said they would never forget the moment when the buck woke up again.

"He kind of looked at us like, 'Hey, what’s going on here?' Then he got back up and ran through the hills. It was great! It was just great," Fair Oaks resident Monica Schuler said.