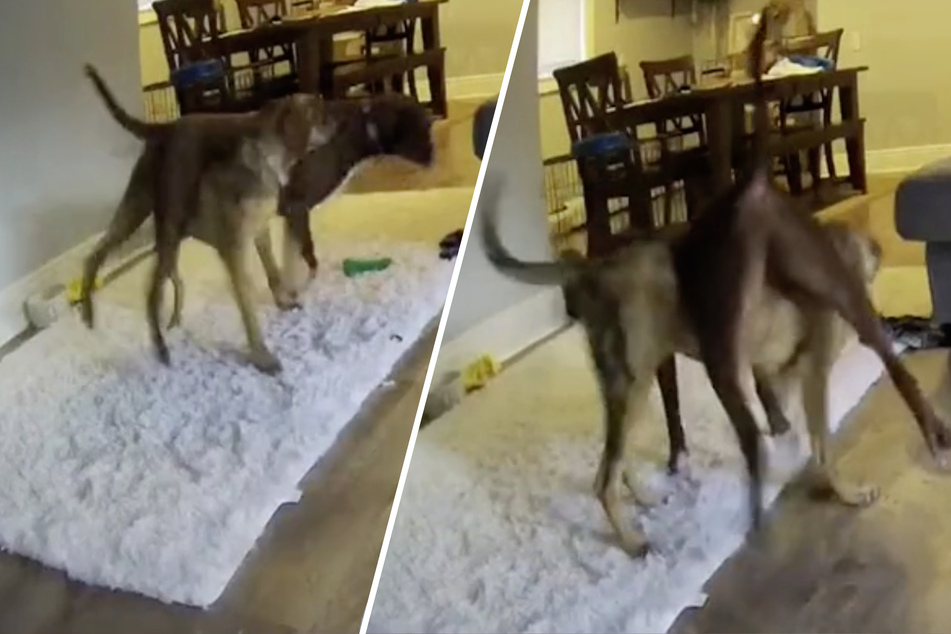 These two dogs seem to be real acrobats.

Internet - A dog camera recorded two very special acrobats walking through the house, balancing each other on their backs. Their owner couldn't help laughing at this bizarre sight – and the internet joined in.

In the video shared on TikTok, a man is sitting on the sofa and eating his pizza with relish, when two dogs appear on his left and perform an interesting athletic feat.

One of pups crawls under the belly of the other and lifts him up as he stands.

Is this just an accident or have the two been practicing this hilarious stunt? In any case, the first dog doesn't look puzzled, nor does he try to buck his playmate.

Even the dog riding on top doesn't bat an eye – as if they had done the same hundreds of times before.

On this silly piggyback ride, one of the furry friends carries the other through the living room – and makes his owner laugh uncontrollably.

What are these two crazy pups thinking?

The internet is also completely blown away. Over 400,000 people have already seen the funny clip since it was uploaded on November 14.

"What you find in your dogs camera," she titled the video.

Hundreds of users couldn't help themselves and expressed their enthusiasm in the comments, where they celebrated the dogs' hilarious tricks.

One viewer joked: "They practiced that all day long and you just laugh about it."

"Wow, I haven't laughed that much in years. I just can't stop watching this," wrote another.

Many users were also grateful for the existence of pet cameras: "So many damn funny shots when you're not at home!"