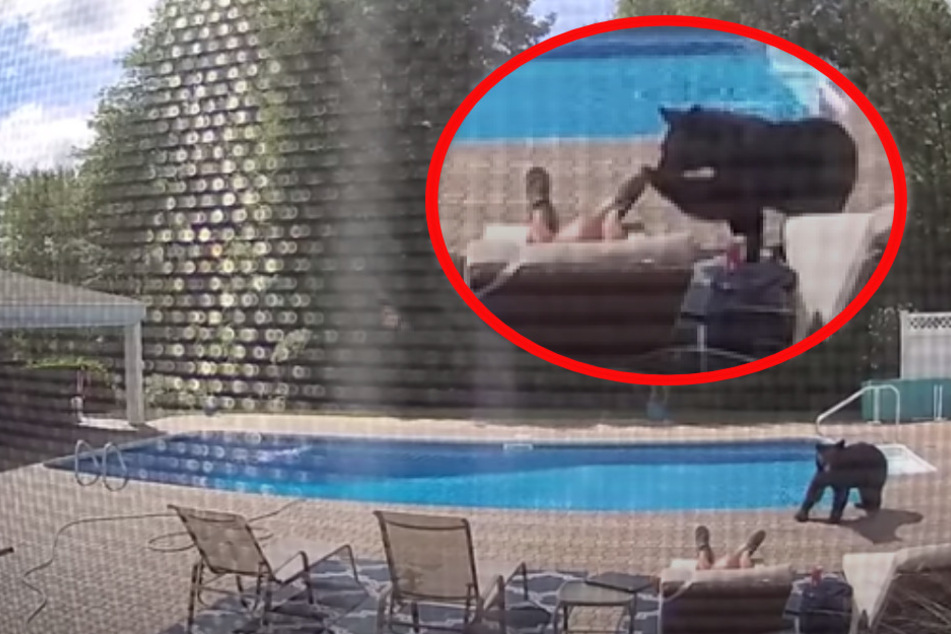 A bear strolled into a man's backyard and woke him up with a little nudge.

Greenfield, Massachusetts - They say don't poke a sleeping bear, but what do you do when the bear pokes you? Matthew Bete faced that question when a surprise visitor woke him up from a pool-side.

It was a sunny day and the Massachusetts man was relaxing in his deck chair, enjoying the weather beside his backyard pool. Letting his worries melt away, he nodded off.

While he was snoozing, the house's surveillance camera captured an unexpected scene that is now doing the rounds on YouTube and social media.

While Matthew was napping, a "neighbor" bumbled into his pool area on all fours. It was a black bear!

In the video, the bear strolls leisurely towards the pool, where he first takes a big gulp of water. Then he turns to have a look around and notices his host sleeping in the deck chair.

Interested, the animal then ambles over to Matthew, who must be a very heavy sleeper, as having his foot sniffed at doesn't wake him up. The bear then gives the foot a little poke, which finally does the trick.

What a sight to wake up to! Matthew is initially startled, but so is the bear, who immediately runs off. But as the man pulls out his phone and started to record his furry alarm clock, it edges back into view, willing to pose for a few snapshots.

Clearly not wanting to overstay its welcome, the bear leaves Matthew's backyard after the photo shoot.

Dawn Bete, Matthew's wife, posted the video online. Before she saw it for herself, Dawn didn't believe her husband's story. She told The Sun, "Of course, I thought he was kidding! He told me to look at the Ring video. Sure enough…"

She could hardly believe her eyes.

Particularly in Massachusetts, black bears have massively expanded their territory over the past few years. Now there are more and more encounters with humans.

The interactions aren't always this friendly. So far this year, there have been three fatal bear attacks in North America.