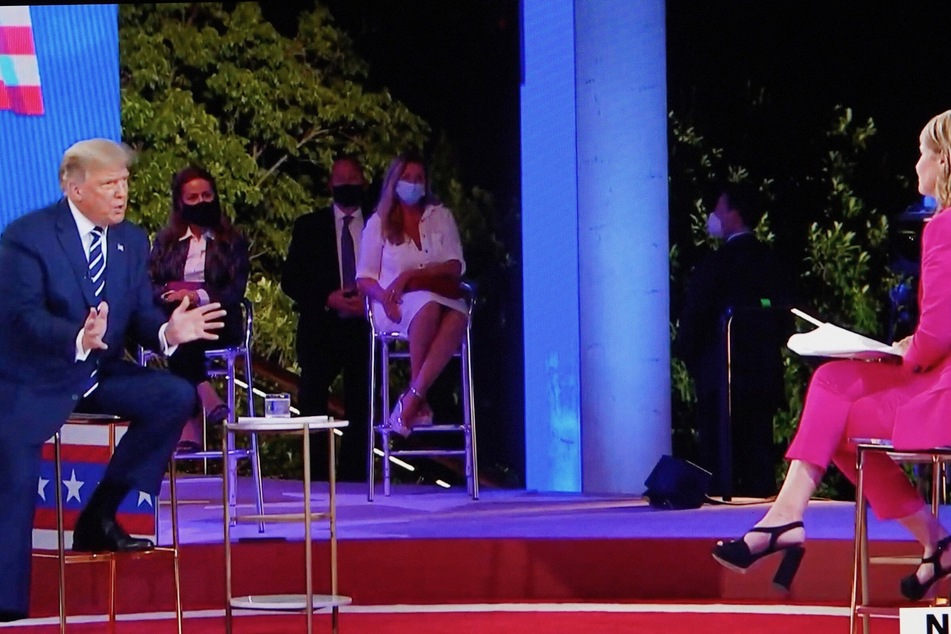 While Trump was noncommittal on the right-wing conspiracy theory, Biden dodged the question of Supreme Court packing.

Both candidates were questioned on aspects of the coronavirus pandemic, a key campaign issue on which they have starkly opposing views.

When asked if his opinion on wearing masks has changed since his coronavirus diagnosis, Trump (74) said no, adding that he supports masks but then falsely claiming that 85% of mask-wearers are infected with the virus.

Biden (77) used his event to attack the president on his handling of the Covid-19 crisis, while pitching himself as the president who will unite the country after a divisive four years under Trump.

In Miami, during the event broadcast on NBC and moderated by long-time host Savannah Guthrie, Trump was asked about his personal debt, which is a staggering $421 million, according to a report in The New York Times.

Trump dismissed the report, but then appeared to confirm the number, saying that his debt is "a peanut" compared to his net worth.

The president's town hall was scheduled after he declined to participate in the second presidential debate after it was moved to a virtual event due to his coronavirus diagnosis.

Trump also claimed that he was not familiar with the QAnon conspiracy movement. But he then appeared to provide tacit support for the far-right belief system, which falsely claims that Trump is fighting against a global elite of pedophile satanists operating a child trafficking ring.

"I know nothing about QAnon," Trump said when asked by Guthrie to denounce the conspiracy.

At his own town hall event, broadcast by ABC and staged in Philadelphia, Biden was asked about packing the Supreme Court. Raising the number of justices over the traditional nine would be possible if the Democrats sweep the November election, gaining not only the White House, but also a majority in the Senate, while keeping control of the House.

Liberals are calling for Biden to pack the court since Trump has nominated Amy Coney Barrett, swaying the court's balance to 6-3 between conservatives and liberals. Critics of the practice say it would politicize the court in an unprecedented manner.

Biden said he is "not a fan" of the practice, but he is opening to supporting it if Republicans in the Senate confirm Trump's conservative Supreme Court pick before the November 3 election.

Biden said he would clarify his position before the election.

Biden continues to lead in fundraising and the polls

A second and final presidential debate is scheduled for October 22, less than two weeks before election day, with Trump currently trailing Biden by a significant margin in the polls.

The Republican president seems to be pinning his hopes on his rallies as he seeks to boost enthusiasm among his base and turn out the vote, swiftly returning to the campaign trail after recovering from the coronavirus.

Biden is also outraising and outspending the Republican president on campaign ads. Biden raised $383 million in September, after hauling in $364.5 million the previous month.

The former vice president tweeted on Thursday that he was "incredibly humbled" by the "astounding" amount.

By comparison, Trump raised $210 million in August. His campaign has not disclosed his September haul.

Biden's running mate, Senator Kamala Harris, has cancelled campaign travel until next week after two people on a flight she had been on tested positive for the coronavirus.