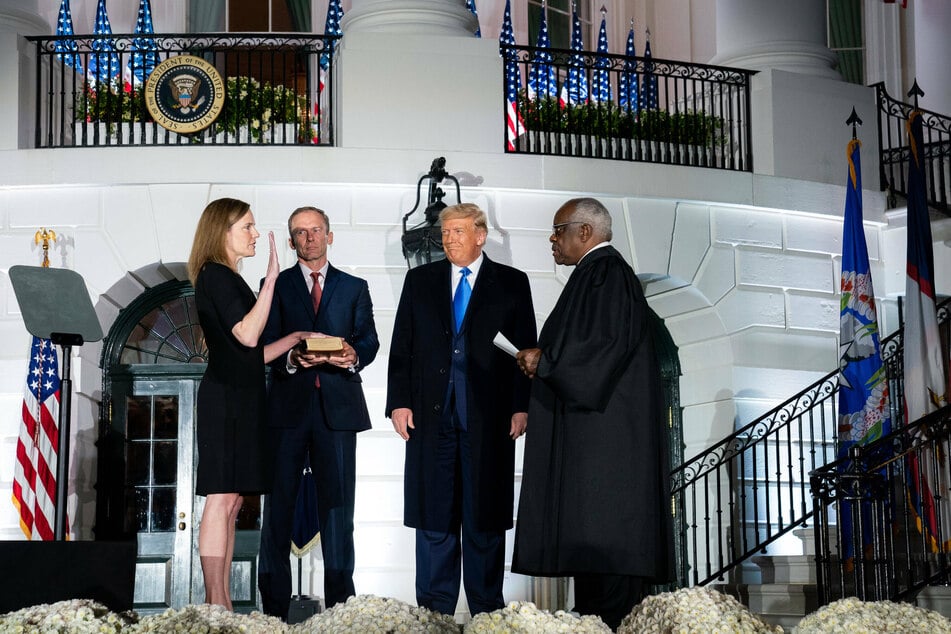 The Senate confirmed Amy Coney Barrett as a justice on the Supreme Court in a narrow 52-48 vote that was split almost exclusively along partisan lines.

Washington D.C. - President Donald Trump hailed a "momentous day" on Monday, shortly after the Senate confirmed Amy Coney Barrett as a justice on the Supreme Court in a narrow 52-48 vote.

The confirmation gives the top court a six-to-three conservative majority and is a win for Trump (74), who nominated Barrett shortly after the death last month of former justice Ruth Bader Ginsburg, a liberal icon.

Republicans in the Senate moved swiftly to fill the vacancy before next week's presidential election.

The vote, among the closest in modern history, was a partisan affair, with just one Republican defecting to join the minority Democrats.

Opponents fear Barrett will swing the court in a sharply conservative direction, potentially for years to come, including on issues such as health care protection, abortion, LGBTQ+ rights, and gun control.

The Democratic Party has also decried the entire process, saying that never before has the Senate confirmed a Supreme Court justice so close to an election. Some 60 million people have already cast ballots, using early voting systems.

The seat on the top court is for life, making the stakes high for both sides.

Trump held a White House ceremony within the hour after Barrett was confirmed by the Senate, stressing the conservative philosophical bona fides of Barrett.

In a short speech after she took an oath of office – administered by conservative Justice Clarence Thomas, the longest-serving judge on the top bench – Barrett again laid out her core judicial values.

Barrett, a 48-year-old former academic who first became a federal judge in 2017, is the third Supreme Court justice appointed by Trump in the less than four years he has been in office, an alarming fact for Democrats.

The last president to appoint as many top judges was Ronald Reagan in the 1980s, though he did so over two terms.

The White House held the celebratory event to swear-in Barrett despite concerns about the coronavirus pandemic. Trump's last event for Barrett in the gardens around the historic building likely caused an outbreak and Trump himself became ill several days later.

Supreme Court Chief Justice John Roberts will formally swear in Barrett on Tuesday at a private ceremony, allowing her to formally begin duties on the court, solidifying the conservative majority.

Democrats and activists protest the confirmation

Democrats protested in the Senate all through the night, in a last ditch, futile effort to stop the confirmation.

"Tonight, the Republican majority will break 231 years of precedent," Chuck Schumer, the top Democrat in the Senate, said in his party's final speech before the vote. "The American people will never forget this blatant act of bad faith."

Schumer warned the Republicans would "regret" the move for years to come.

Mitch McConnell, the Republican leader, brushed aside Democratic concerns about the process, insisting Barrett is a qualified nominee and her nomination was an expression of the party's mandate, as it currently holds both the White House and the Senate.

"We're a constitutional republic. Legitimacy does not flow from their feelings," McConnell said on the Senate floor, pointing at the Democrats. "You can't win 'em all, and elections have consequences."

Many leading Democrats are increasingly threatening to expand the nine-member court if they win big next week, but the party's presidential nominee Joe Biden (77) has been more cautious, saying only that he would explore judicial reforms if elected.

In a procedural step on Sunday, the Republican-controlled upper chamber of Congress voted 51-48 to wind down debate after 30 hours and cleared the way for a final confirmation vote.

Democrats used the hours to their fullest, staying in session throughout the night, to rail against the process and to claim Barrett would strip health care protections and generally favor conservative positions on issues such as abortion and gun control.

Opinion polls have shown voters have warmed to Barrett, with support for her nomination rising in the weeks since Trump first made the announcement.