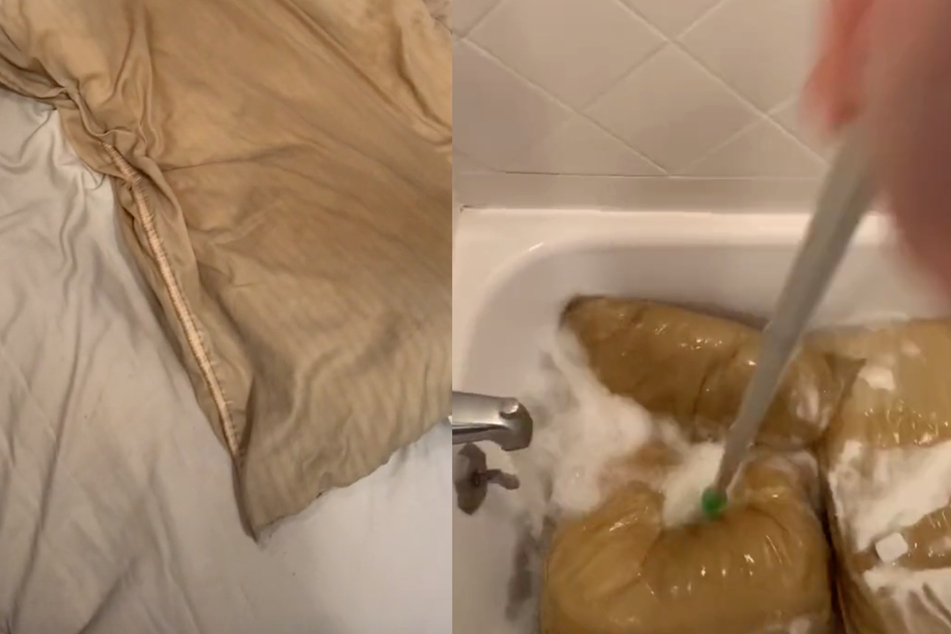 This TikTok user cleaned her boyfriend's pillows and the Internet is horrified.

Internet - A TikTok user filmed herself washing her boyfriend's beloved pillows - and the results left the internet speechless.

Usually, itsamemargieo spends her time on TikTok sharing funny clips of her many pets.

But for her latest video, she had different idea.

Everything starts out quite innocently: she introduces three cushions and explains that her boyfriend doesn't want to throw them away - not for anything in the world.

So far, so good, but here's the problem that made everyone: he's had them for ten years now and hasn't washed them once.

Itsamemargieo finally had enough and while her boyfriend was at work she decided to secretly clean them.

She takes the brown pillows and dumps them into the bathtub. She then adds some detergent, a bit of borax, and some bleach before rinsing them out – or at least trying to.

"Then I got impatient and switched to the washing machine," she says. After a few rotations, the pillows were put into the dryer.

At the end, they look as good as new. But wait a second... Are they even the same cushions?

Itsamemargieo ends the video by writing, "He probably won't notice... but I can sleep better knowing those nasty pillows are clean."

TikTok users are creeped out

The video went viral and already hit over 1.7 million views. The comment section is filled with users expressing their disgust:

Itsamemargieo isn't take things so seriously though. She even changed her TikTok bio to "Accepting pillow donations" recently.

Well, she's definitely got a sense of humor. And three squeaky-clean pillows!