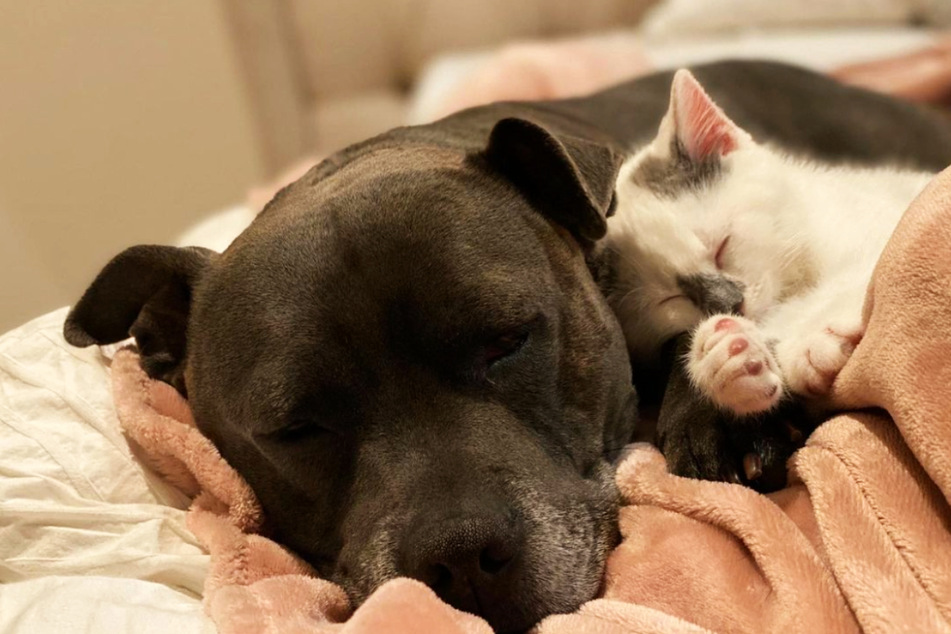 When a couple rescued a little cat from a drain and decided to adopt it, their pit bull wasn't happy at all. With a little time, that soon changed.

Melbourne, Australia - These two really had a difficult time at first, but today they can't live without each other.

It all started when a young couple went on a stroll one day and heard a high-pitched meow coming from down a drain.

As they took as closer look, they found a tiny little kitten crying for help.

As The Dodo shared on their Facebook, Nathan and Leana immediately knew that they had to do something. There was no way they could just leave the little guy in there – so they slid the lid open.

Nathan then let down his jacket for the cat to latch onto, but the animal was too small to do so. He grabbed a shovel instead – and soon took a sigh of relief. The little four-legged-friend walked onto it and was able to be lifted out of the drain.

The kitty was finally safe!

The couple took the little guy straight to the vet to make sure he wasn't injured. Luckily, the cat was doing excellently. He was ready to come home to meet his new big brother.

Leana remembers that at first they were afraid the cat, whom they named Tic Tac, might be afraid of their pit bull Ziggy.

But it was the other way around! The dog wasn't a fan of his family coming home with a new member all of a sudden – especially since the little guy just wouldn't leave him alone. Ziggy was terrified.

After about one week of Ziggy avoiding Tic Tac, Leana and Nathan were afraid that their new family dynamic might not work out. But they decided to remain patient – which soon paid off!

Tic Tac never gave up on winning Ziggy's heart. He got a little closer to his brother day by day until he was finally able to rub his head against the dog's neck.

"OK, I guess this isn't too bad," Ziggy probably thought, because after that moment, the two became inseparable.

Now they love spending their days playing and cuddling with each other and taking joint baths. Tic Tac has even started going on walks with his family.

What a beautiful happy ending!