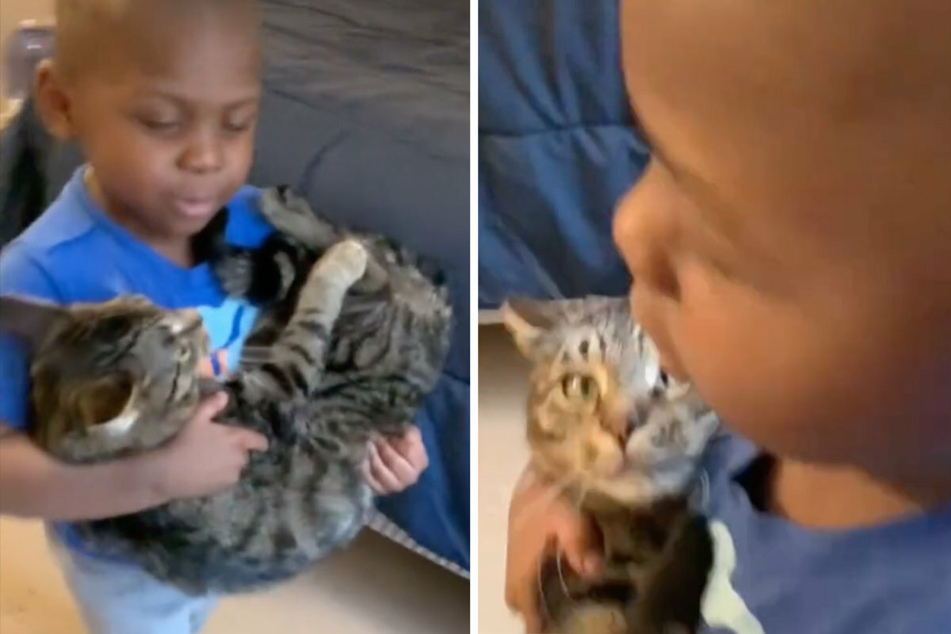 Rock-a-bye kitty: boy sings his cat lullaby and the internet loves it

The cat has to sleep – now! At least that's what three-year-old Carson thought as he sang his four-legged-friend a rather unconventional lullaby.

Internet – Cats sleep 12 to 16 hours a day on average, but that didn't seem to be enough for Carson.

He was convinced that his beloved pet should go to sleep now – whatever the cost!

That's why he lifted the animal up into his thin arms before lovingly talking and singing to it.

His mother Kellie couldn't help but laugh as she pulled out her phone to film the duo.

"This is too cute. He loves our cat he's the sweetest!" she captioned the video, which she later uploaded to TikTok.

But the cat didn't seem to agree. All it did was stare wide-eyed at its little owner – clearly not enjoying the situation.

"He's going back to sleep," said Carson with confidence. Sadly, the cat did not.

Maybe Carson should have sung something other than "Bwa Bwa Bwa Bwu"?

TikTok users can't get enough of Carson and his cat

Kellie and Carson's TikTok followers absolutely loved the video and immediately flooded the comment section with laugh emojis. By now, the clip has amassed almost 500,000 views!

"This is so sweet," one user wrote, while others noted that the animal was clearly very patient.

The boy's family is probably already used to the huge success: their YouTube, TikTok, and Instagram accounts are already full of funny clips featuring Kellie and her three-year-old son.

It's probably only a matter of time before the next funny video of little Carson goes viral.