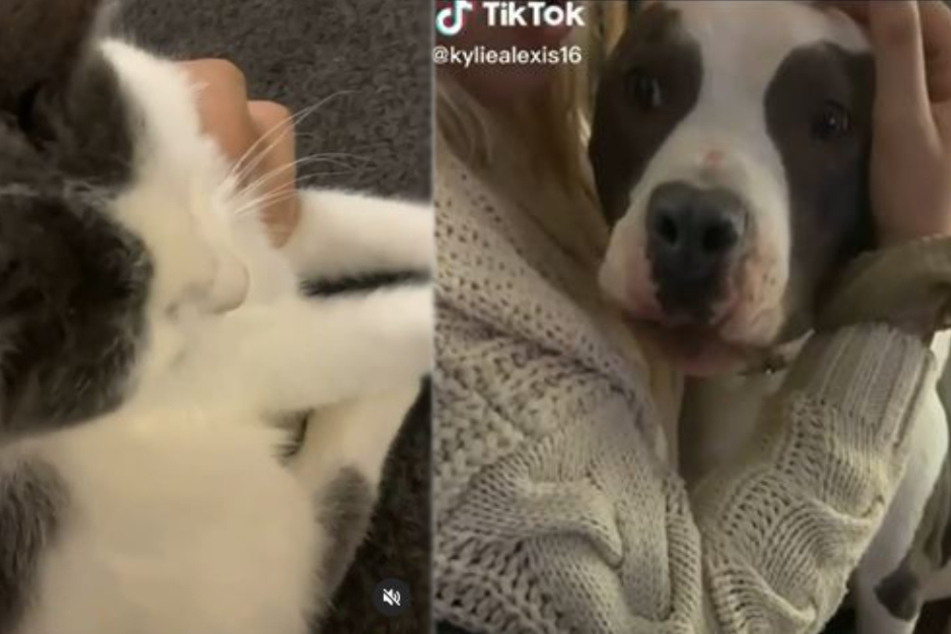 Was that a good idea? An animal lover introduced her pit bull to her new cat and let the camera roll to capture their reaction.

Internet - A pit bull met his new feline housemate for the first time and his hilarious reaction had everyone laughing!

This pit bull has captured the attention of some four million TikTok users. At the end of October, owner Kylie Alexis uploaded a 17-second clip documenting the dog's first encounter with her new cat.

The animal lover titled the video: "When your dog finally gets to see the kitten you've been hiding in the bathroom for two weeks..."

But what exactly is going on with the pit bull in the video? Many TikTok users asked themselves the same question after watching the curious video. The dog's strange, gurgling sounds are not easy to interpret.

Is the poor pooch afraid of the cat? Or are those chirping noises just expressions of joy and excitement?

According to the Daily Mail, Kylie quickly clarified things.

Cats and dogs can get along after all

According to Kylie, the dog was "very excited" when he met the cat. Kylie rescued the stray feline and had to keep it in the bathroom for two weeks so it could recover.

The delayed meeting heightened the pit bull's excitement once he finally got to see his new playmate.

Several TikTok users confirmed Kylie's theory. One wrote: "My pit has done this when her dad came home from deployment, sometimes these noises are just out of excitement or overwhelming feelings."

Another said, "That's the same reaction my female pittie had when she finally got to meet the baby I had been hiding in my belly for nine months."

Kylie's clip is now doing the rounds on Instagram as well, where it currently has well over 400,000 likes. She has since posted a second video of the pit bull and the kitten playing together.

Her pets prove that dogs and cats can be best friends after all!