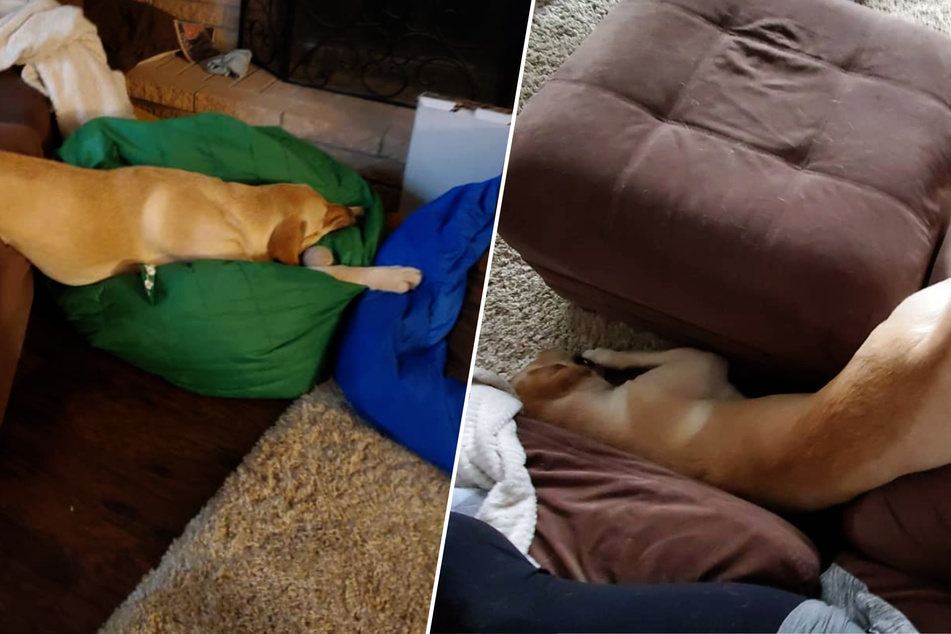 This dog takes naps in the most hilarious positions!

Internet - This dog loves to sleep, and he will take a nap anywhere, anytime, and on anything!

Internet - It's best to let this sleeping dog lie: Howard loves to nap, and he will get some shuteye anywhere, anytime, and on anything!

The pooch likes to spend the majority of his time snoozing, and there are few things will get in the way of the Goldador mix's naps.

He will drape himself over anything, anywhere, despite his considerable size.

The 100 pound animal is almost five feet long, when stretched out. Whether he's awake or asleep, Howard is a real handful!

According to his owner, Spencer, he runs around the house and knocks over anything in his path with his tail, only to then claim furniture of any size as his "bed" when he runs out of energy.

"He loves to stretch out with his legs straight out behind him sleeping on his belly," Spencer told The Dodo. The man also discussed his pooch's favorite position: front half of his body on a piece of furniture, back half hanging off!

The dog first started sleeping draped over the furniture when he was just a pup and the family was sure the dog would outgrow the strange habit, but he never did. To this day, Howard loves to lie on his belly, half on the couch and half off.

But this strange habit doesn't worry anyone; it makes his family happy: "I am OK with that because it cracks me up daily," said Spencer.

These days, Howard has a favorite spot that he regularly claims for himself: the ottoman.

No one really knows what exactly the appeal of these strange sleeping positions are, but it doesn't matter much.

Howard's unique sprawling sleep styles have brought the family endless joy, despite the fact that the ottoman is now off limits for anyone who isn't Howard.