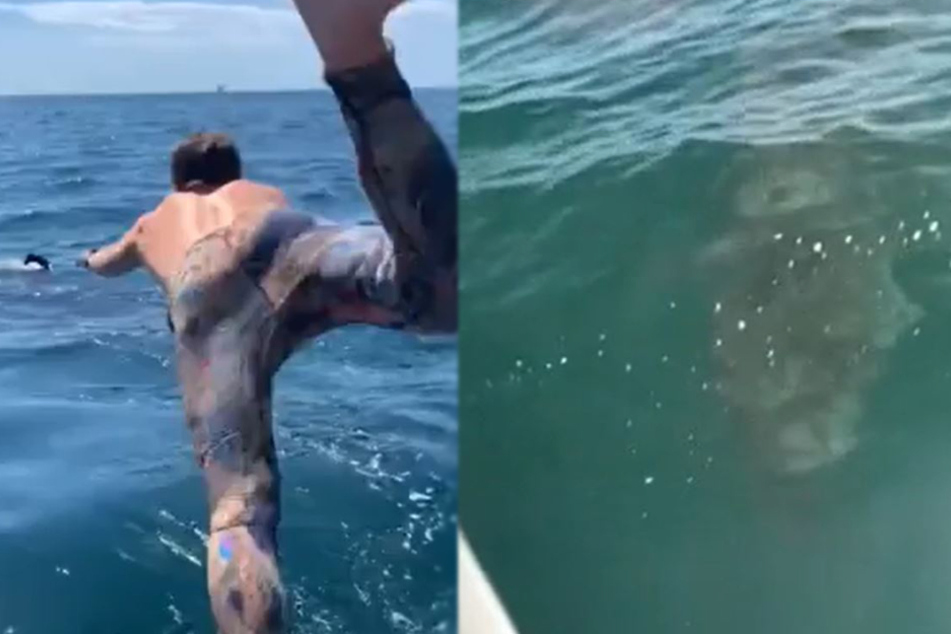 Get out of the water! Man jumps in to swim with a shark but quickly regrets his decision

A man wanted to swim with a shark, but as soon as he was in the water he could not get out fast enough.

Internet- A man dove into the water to swim with what he thought was a harmless basking shark. It wasn't, and the video of the man's close call went viral.

The clip posted on Reddit shows a man who thinks he is diving off a boat to splash around with a harmless basking shark, a species that only feeds on plankton.

But the people watching on soon start to panic.

The man can be heard yelling, "This was a bad idea." He then turns around and starts swimming back to the boat as fast as he can. The person behind the camera also hollers, "Get back on the boat!"

The huge sea creature turns towards the boat, and the swimmer screams, "Ah, I touched him! Oh f**k."

As the creature comes closer to the boat, the cameraman suddenly realizes something: "...that's not a basking shark, Dude!"

He can't bring himself to say what they're actually dealing with: a great white shark!

The video ends just as the terrified swimmer seems to make it back to the boat.

The footage of the wild incident, which took place at an unknown location, already has 43,700 clicks since its release on Sunday.

Reddit users had a lot to say about the video. Some thought that the swimmer's mistake was a pretty normal one, because basking sharks and great whites often get confused.

Basking sharks are usually more tolerant of swimmers and far less aggressive. Most users are also convinced that the shark in the video is a great white.

Whatever the species involved, there was still a shark there and many commenters found the man's actions crazy and even suicidal. "Who sees a shark fin and jumps into the water? That's just trying to make Darwin happy," wrote one user.

Others could barely watch the video: "Holy crap that made me anxious. That is my worst fear, packaged into a video. Granted I would have never left the boat to begin with...so..."

The reckless swimmer might want to follow that instinct and stay put the next time he sees something lurking in the water.